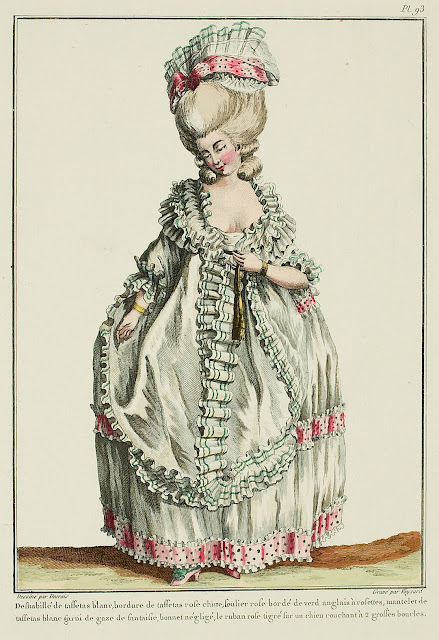 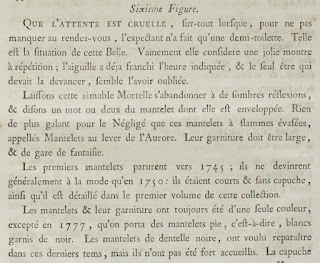 Waiting is cruel, especially when, in order not to miss the rendez-vous, the expectant one has only made a half-toilette.  Vainly she checks a pretty watch over and over; the hand has already crossed the intended hour, and the only being who should be ahead of it seems to have forgotten.

Let us allow this amiable Mortal to abandon herself to her somber reflections, and let us say a word or two on the mantelet in which she is enveloped.  Nothing is more gallant for Négligé than the mantelets with flared points, called "rise of Dawn" Mantelets.  Their trimming must be large, and of fantasy gauze.

The first mantelets appeared around 1745; they only became generally fashionable in 1750: they were short and without hoods, as was detailed in the first volume of this collection.

Mantelets and their trim have always been of one color, except in 1777, when piebald mantelets were worn, that is to say, white trimmed with black.  Mantelets of black lace wanted to reappear in these latter times, but they have not been strongly welcomed.  The hood of the mantelet has also felt  these changes; the latest fashion wants that it be nearly entirely open or reversed, forming more of a type of capote on the mantelet, rather than a hood. 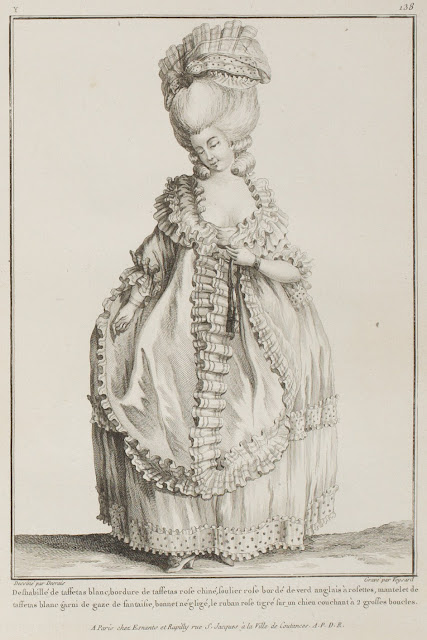