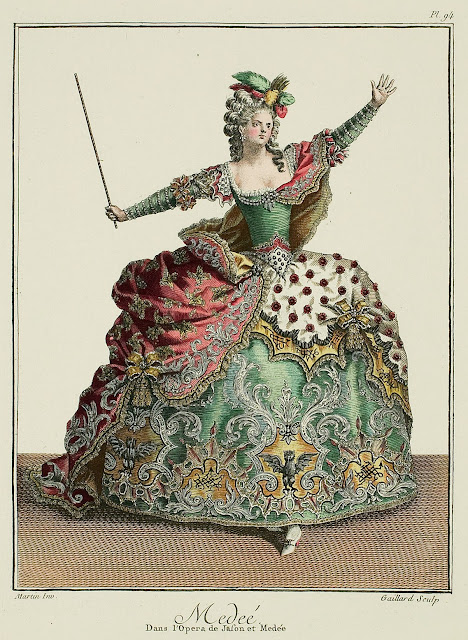 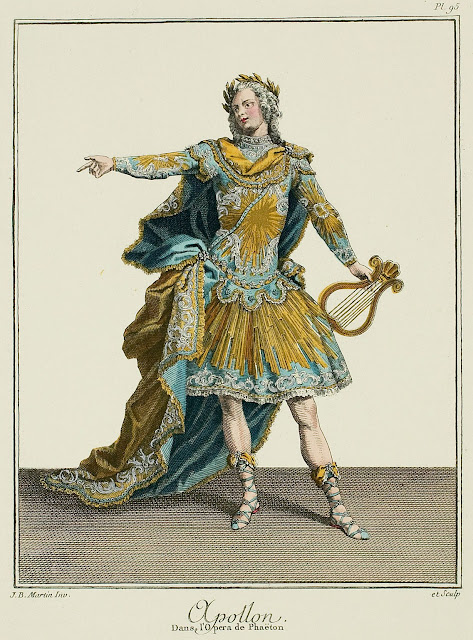 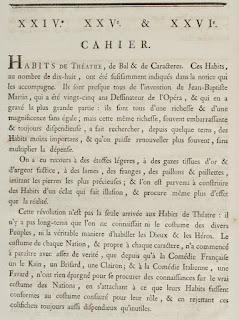 Theatrical Dress, for Balls and for Characters.  These Outfits, numbering eighteen, have been sufficiently described in the caption which accompanies them.  They are nearly all the invention of Jean-Baptiste Martin, who has been the Designer for the Opera for twenty-five years, and who has engraved the greater part of them; they are all of a richness and magnificence without equal; but this same richness, often embarrassing and always expensive, has been found, for some times, in less important Dress, and that one may be able to renew more often, without multiplying the expense.

Recourse has been made to light materials, gauzes of cloth of artificial gold and silver, lamés, fringes, links and sequins, imitating the most precious stones; and the Dress is constructed with an éclat which makes the illusion, and procures even more of an effect of reality.

This revolution is not the only one that has happened to Theatrical Dress: for a long time, one knew neither the costume of diverse Peoples, not the truthful manner of dressing as Gods or Heroes.  The costume of each Nation, and of each character, has only begun to seem rather truthful since the Comédie Française's Kain, Brisard, Clairon, and the Comédie Italienne's Favard have spared nothing to procure for themselves familiarity with the real dress of Nations, making their Dress consistent with the costume proper to their role, and in rejecting those trinkets that are always as expensive as they are useless.

We will remark also that in the Opera, they have abolished, in Theatrical Dress, using panniers.  The female Dancers have given up the amadises, which give them arms that are too long and without grace.  The male Dancers have taken up, for the same reason, bouffant sleeves.  Actors' chests have been freed from hard and closed bodices, which has given them almost complete freedom.  These changes are hoped, at last in Theatrical Dress to soon arrive at a degree of perfection and truth to which they are susceptible. 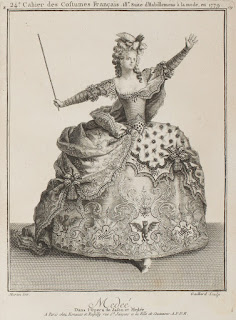 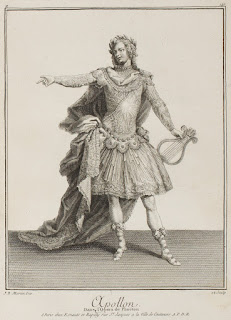