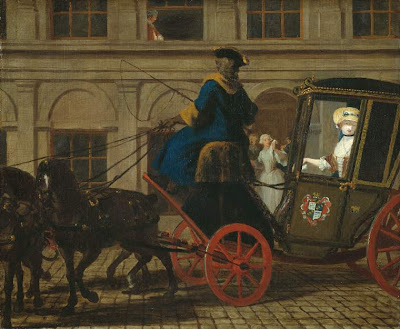 Finally, finally, Pamela's starts and stops and Mr. B's waylayings result in Pamela climbing into his coach to be driven home.  But Letter XXXII begins with Pamela bewailing her fate, before taking a step back to the time when she thought she was being taken back to her parents.


The long-hoped-for Thursday morning came, when I was to set out ... They all would have made me little presents, as tokens of their love; but I would not take any thing from the lower servants, to be sure.  But Mr. Longman would have me accept of several yard of Holland, and a silver-snuff-box, and a gold ring, which he desired me to keep for his sake; ...
And when Mrs. Jervis told me with a sad heart, the chariot was ready with four horses to it, I was just upon sinking into the ground, though I wanted to be with you.
... But Harry carried my own bundle, my third bundle, as I was used to call it, to the coach ... I looked up when I got to the chariot, and I saw my master at the window, in his gown; ... 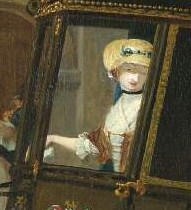 Pamela is still dressed in her sad-colored wool gown, although this time you can see the front of it - which looks to me like it's laced over the ends of her muslin kerchief.  And this time it does show her "black silk necklace", too.  The hat she previously carried by its strings is no securely tied down and has a nice curve to it.  While she looks pretty nice, she's still subtly out of place in this carriage. 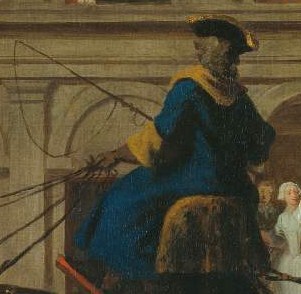 Robin Coachman is entirely covered by a greatcoat.  Blue was a cheap color, the dye deriving from the common woad plant; it was a common color for servants' livery for this reason.  I would describe his collar and cuffs as drab, a color with several definitions that agree it's a kind of light brown.  He is also wearing a lightly powdered wig, brown leather gloves, and a cocked black hat with gold braid around the edges.

The servants in the background are hard to make out, but the women in front can be seen.  She is dressed much like Pamela, in a plain gown possibly fastened over a kerchief.  Her cap covers her hair much more fully, though, and she may also be wearing a apron.

Mr. B can just be made out at the window, in the same cap he wore when he surprised Pamela in bed, and a reddish-brown morning gown/wrapping gown.
1740s 18th century gentlemen gown portrait analysis