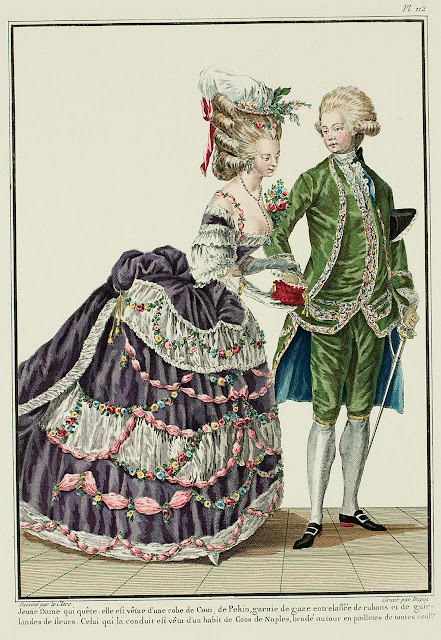 Young Lady questing: she is dressed in a Court gown of Pekin, trimmed with gauze interlaced with ribbon and garlands of flowers.  The man who escorts her is dressed in a suit of Gros de Naples, embroidered around the edges with sequins in all colors. (1779) 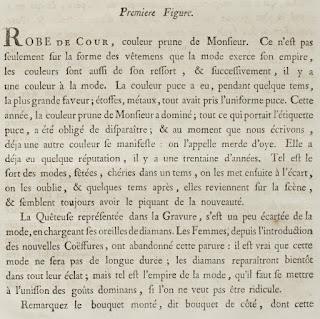 Robe de Cour, in "Monsieur's plum" color.  It is not only on the form of clothes that fashion exercises its empire: colors are also in its purview, and there are successive fashionable colors.  The color puce has had, for some time, the greatest favor; fabrics, metals, everything took on a uniform puce.  This year, the color "Monsieur's plum" dominated; everything that carried the puce label has been obliged to disappear; and at the moment that we are writing, already another color is manifesting: it is called "goose droppings".  It has already had some reputation for thirty years.  Such is the strength of fashion, celebrated, expensive for a time, they are then put in the discard pile, they are forgotten, and some time after, they come back on the scene and always seeming to have the piquancy of novelty. 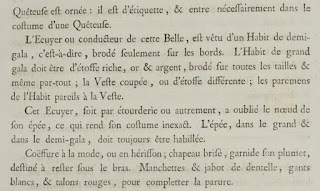 The Quester represented in the Print is a little behind the fashion, in putting diamonds in her ears.  Women, after the introduction of the new Coiffures, have abandoned this parure: it is true that this fashion will not be of long duration; diamonds will reappear soon in their éclat; but such is the empire of fashion that it is necessary to be united with the dominant tastes, if one doesn't want to be ridiculed.

Note the mounted bouquet, called side bouquet, with which the Quester is decorated: it is proper, and necessarily enters the costume of a Quester.

The Squire or escort of this Beauty is dressed in a demi-gala Suit , that is to say, embroidered only on the edges.  The full-gala Suit must be of rich materials, gold and silver, embroidered all over; the coupé Vest, made of different materials; the parements of the Suit matching the Vest.

This Squire, whether from thoughtlessness or something else, has forgotten the bow for his sword, which renders his dress incorrect.  The sword, in the full- and half-gala, must always be dressed.

Fashionable coiffure, or in herisson; chapeau brisé, trimmed with its plume, intended to be held under the arm.  Manchettes and jabot of lace, white gloves, and red heels, to complete the parure. 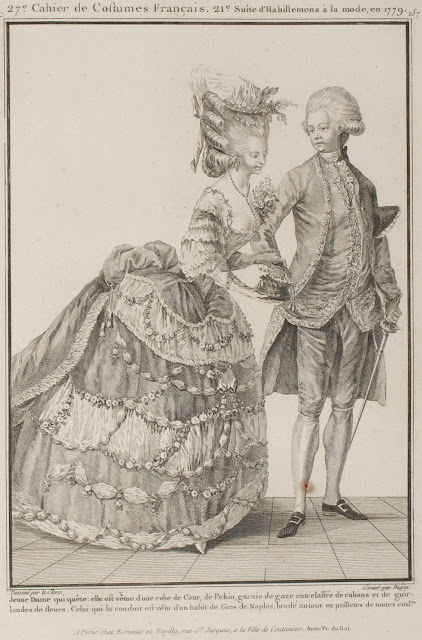