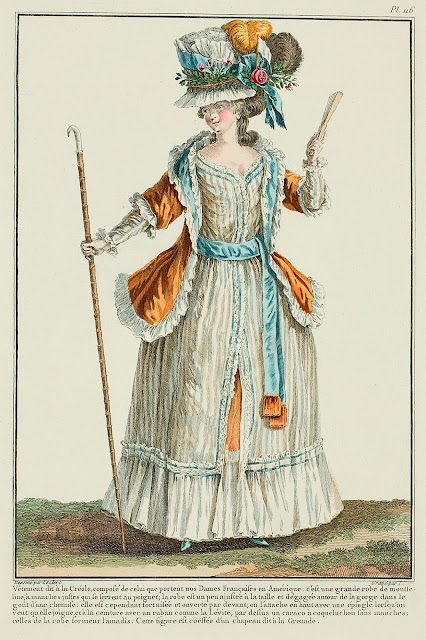 Dress called à la Créole, composed of what the French Ladies in America wear: it is a large muslin gown with fitted sleeves that tighten at the cuff; the gown is a little fitted at the waist and freed around the throat in the taste of a shift: it is however very easy and open in front; it is fastened at the top with a pin where one wants to join it, and at the waist with a ribbon like the Lévite; over this is a hooded caraco without sleeves; those of the gown form amadises.  This figure is coiffed with a hat called à la Grenade. (1779) 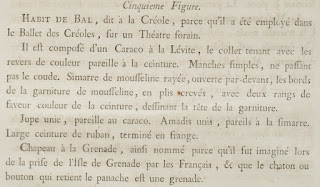 BALL DRESS, called à la Créole, because it was used in the Ballet of the Créoles, in a foreign Theater.

It is composed of a Caraco à la Lévite, the collar and revers of a color matching the belt.  Simple sleeves, no longer than the elbow.  Simarre* of striped muslin, open in front, the edges of the muslin trimming in crevé pleats, with two rows of faveur** in the color of the belt, designating the head of the trimming.

Grenada hat, thus called because it was imagined when the French took the Isle of Grenada, and because the stone or button which holds the panache is a grenade.***

* A robe worn by magistrates and professors
** a narrow and light ribbon
*** either a button with a flaming grenade on it, or a pomegranate 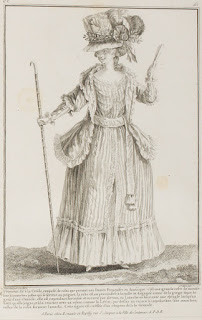