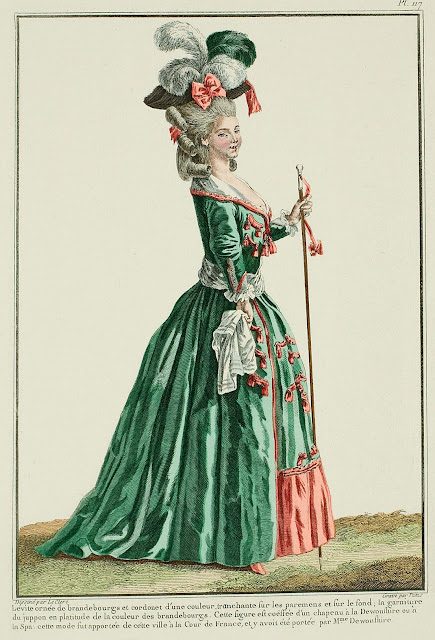 Lévite trimmed with brandenburgs and cords in a sharp color on the parements and on the ground of the gown; the flat trimming of the petticoat is in the color of the brandenburgs.  This figure is coiffed with a Devonshire hat, or Spa hat: this fashion was brought from this city to the Court of France, and was brought there by Mme. Devonshire. (1779)

LÉVITE A LA PRUSSIENNE.  The Gown and the petticoat trimmed with brandenburgs.  Belt in drapery over the Gown, busquée in front,* to free the waist and give it grace.  Sleeves and parements à la cavaliere, opening underneath, following the ancient method abandoned by the Military, because it was inconvenient and because the Minister recognized that it was not economical.

The collar, the parement, the belt, the trimming, and the volant, of a sharp color different from that of the Gown.  Spa hat, seen from the front.  See the third Figure of the following Book, where this hat is shown from another point of view.

* Busquer hasn't turned up recently.  I need to go back and look at the previous uses and Heileen's comments, but this is more explicit in suggesting a downward-pointing curve at the waist 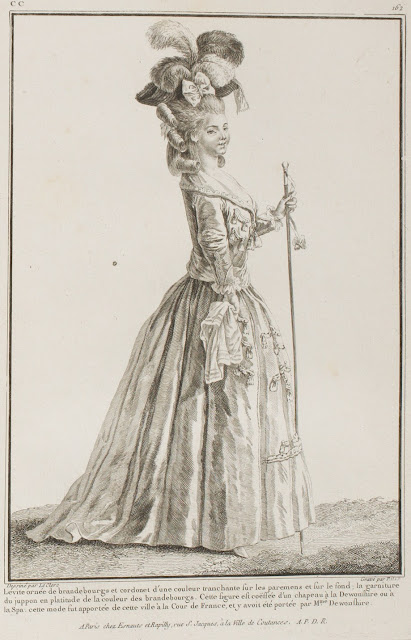