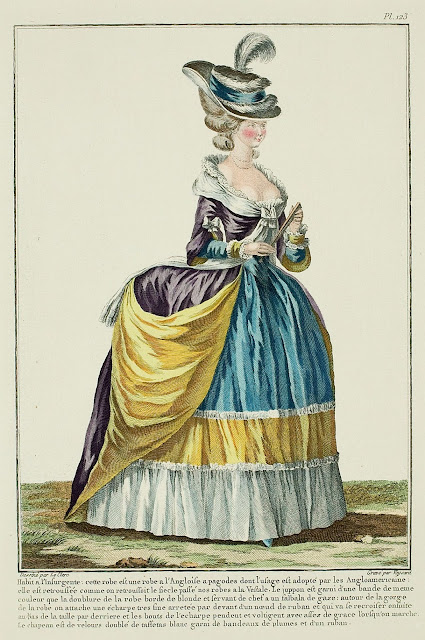 Dress à l'Insurgente: this gown is a robe à l'Anglaise with pagoda sleeves, which usage has been adopted by the Anglo-American women: it is pulled up as our robes à la Vestale were pulled up in the last Century.  The petticoat is trimmed with a band in the same color of the lining of the gown, edged with blonde lace and serving as a head for the gauze flounce: around the neckline of the gown a very fine scarf is attached, held in front by a ribbon bow, and which will recross itself finally at the bottom of the waist in the back, the ends of the scarf hanging and fluttering with enough grace when one walks.  The hat is of velvet, lined with white taffeta, trimmed with bands, plumes, and ribbon. (1780)

ROBE A L'INSURGENTE,* the points of the front pulled up and forming revers of a different color.  Flounced petticoat, trimmed on the head of the flounce with a band matching the revers of the Gown.  Sleeves in flared pagodes, held up with bows.  Amadis sleeves with turned-back parements, in the form of boots, trimmed at the head; scarf placed en palatine, uniting at the middle of the bodice, with a bow matching those of the pagodes, forming a necklace, being thrown back on the hips, and falling in back.

Hat à la Mariniere, of the form described in the caption placed below the Print.

* This probably refers to the American Revolution. 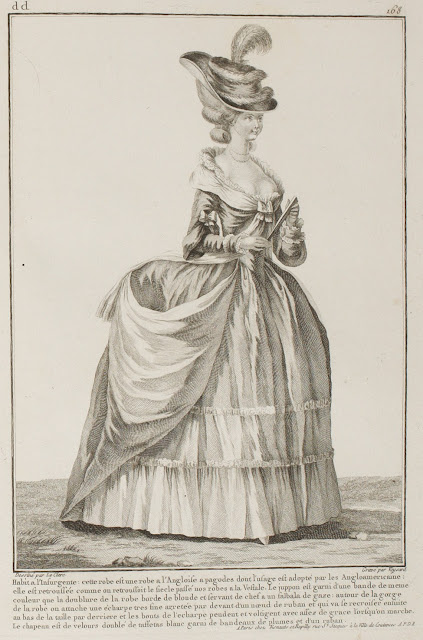