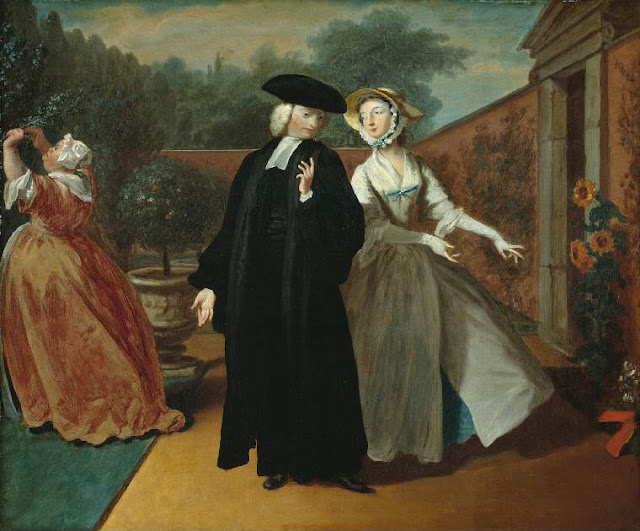 When Pamela got into Mr. B's carriage, she thought she would be taken to her parents' house, but in fact she was driven to Mr. B's other estate in Lincolnshire.  Before she was under the chaperonage of Mrs. Jervis, who was respectable but sometimes rather dim about Mr. B and his attentions, but in Lincolnshire she was watched by Mrs. Jewkes, a thoroughly disrespectable bawd who hits and insults Pamela.  Pamela's one comfort, apart from writing letters to give to her parents someday when she is free, is Mr. Williams, a local clergyman.  They communicate secretly by hiding letters under a sunflower, which Pamela is pointing to in the painting.

There are very few clothing/sewing-related lines in this section apart from Mrs. Jewkes's method of keeping Pamela inside (she takes her shoes) and the following passage:


So I went towards the pond, the maid following me, and dropt purposely my hussy: and when I came near the tiles, I said, Mrs Anne, I have dropt my hussy; be so kind as to look for it; I had it by the pond side.

While "hussy" had at this time the derogatory meaning we associate with it today, it's derived from the word "housewife" - it seems like the neutral sense may have lasted longer as a diminutive to describe housewife sewing cases. 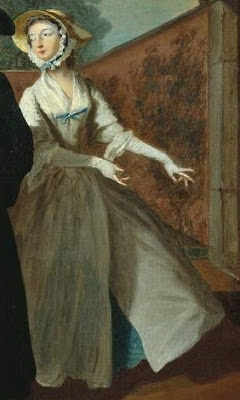 Our heroine is still wearing her demurer cap with ruffled lappets meeting under her chin.  Over it, she has a straw hat.  At first glance, it looks like the dark blue ribbon is a part of the cap, but on looking back at Pamela Preparing to Go Home, it seems much more likely that the ribbon is holding the hat to her head.

Pamela is now wearing the gown she had on in the summerhouse, I think, or one much like it.  I didn't notice a change of clothes in the text; it's possible that the painter simply got bored of the brown gown, or made a deliberate choice to have Pamela appear clearly as a lady and not a maid.  It is off-white or pale pink silk taffeta, with wide, cuffed sleeves, with a blue silk petticoat.  It fastens over the kerchief with a light blue ribbon.  Over the gown, she has a long, sheer apron - it's not a working apron.

Her shift sleeves have two crisp ruffles on each, and she is also wearing plain white mitts. 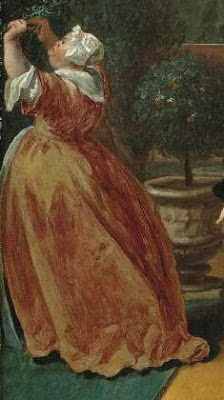 Mrs. Jewkes is a very different story.  The most noticeable thing about her appearance is that she is not wearing stays: this is an immediate hint to a viewer who hasn't read the book that she is not respectable and is not a good character.  Her brown dress is also in contrast to Pamela's pale one, another hint to her lack of virtue and Pamela's purity.  The skirt of her gown trails on the ground, where it looks crumpled, while Pamela's gown doesn't touch the floor.

Because she's facing the other way, messing with a hedge, it's hard to see more details of her gown.  But we can still see that she has ruffles on her shift, a kerchief that isn't tucked in (at least in the back), and a long apron of her own.  Her cap looks awkward, perhaps because it is too small, and her lappets are pinned up.

I've never spent much time on clerical dress, but fortunately while translating L'Art de la Lingere and L'Art du Tailleur (I'm not finished with that one yet) I came across a comparatively large amount of information on it.  Mr. Williams's cassock seems to be about ankle-length, so it is probably what Garsault called a soutanne, rather than a soutanelle, which he said "is distinguished from the lay justaucorps in that it is not separated at the bottom, that is to say, that it is not open at the bottom of the front nor in the back, that it has four pleats only at the sides, and no half-pleat".  It looks as though he's wearing some sort of robe over it, which resembles Garsault's robe de palais; that was said by Garsault to have only been worn by "men of the Court of Justice", but perhaps it was more widely worn before 1771.

Mr. Williams is wearing a bob wig, which was a style very commonly used by the clergy, possibly because it was simple and plain.  Over it, there is a very plain cocked hat.  His white collar was called a rabat, which today in English is a term for a type of clerical waistcoat, so it's one to be careful with.
1740s 18th century portrait analysis