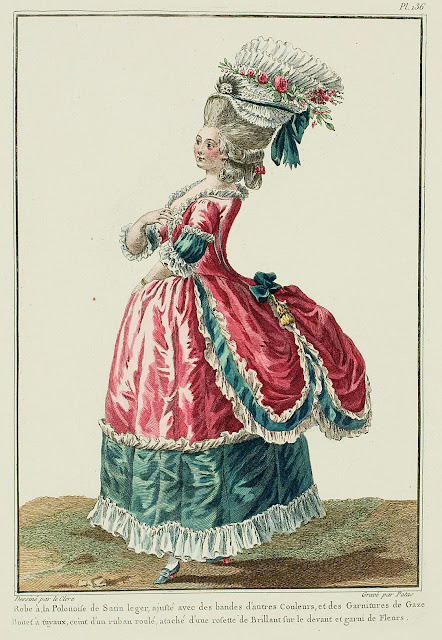 Polonaise of light Satin, trimmed with bands of other Colors, and Gauze Trims.  Cap à tuyaux, belted with a rolled ribbon, attached with a Brilliant rosette on the front and trimmed with Flowers. (1780) 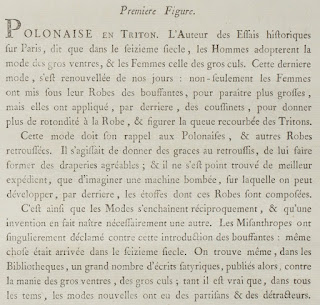 TRITON POLONAISE.*  The Author of historic Essays on Paris, said that in the sixteenth century, Men adopted the fashion of large stomachs, and Women of large bottoms.  This latter fashion is renewed in our days: not only have Women taken bouffantes under their Gowns to appear fatter, but they have applied, in the back, pads to give more roundness to the Gown, and to create the curved Mermen's tail.

This fashion owes its return to the Polonaises, and other pulled-up Gowns.  It gives grace to the retroussis, to give it the form of agreeable draperies; and there is no better expedient than imagining a domed machine on which can be arranged, in the back, the fabrics of which the Gowns are made.

It is thus that Fashions are reciprocally linked, and that one invention is necessarily born from another.  Misanthropes have singularly ranted against the introduction of bouffantes: the same thing happened in the sixteenth century.  Similarly, one finds in Libraries a large number of satirical writings, published then, against the mania of the large stomachs and large bottoms; so it is true that, in all times, new fashions have partisans and detractors.

* Triton was a merman, the son of Poseidon and Amphitrite; triton is also merman in general. 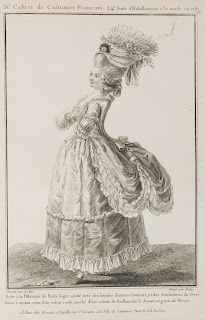