March 05, 2013
After a lot of friendly encouragement, I decided in the past week that I should set up an Etsy shop to play to my strengths - research, historical accuracy, and itty-bitty stitches in the fiddly bits.  (Not cutting and fitting.)  One of the few things I'm willing to be very positive about, when it comes to my abilities, is my hand-sewing 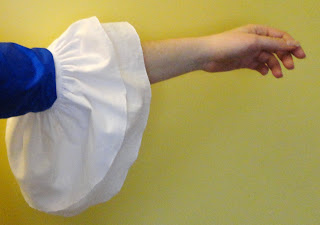 Right now, I've only stocked it with eighteenth century manchettes - the big ones pictured above for earlier gowns, and smaller ones for below-the-elbow fitted sleeves - but my eventual goal is to fill it with la petite oye (hence the name; it's a term I found in the first volume of Galerie des Modes which refers to the added trimmings of a gown) for several different eras.  On Taylor's (Dames à la Mode) recommendation, I've started working on Regency chemisettes.  (Thank you, Ginger.)  I've been doing research on collars and undersleeves of the 1840s-70s as well.

Over the past few days I've been mainly experimenting with a length of white cotton that's a little heavy for my taste, but I'm waiting on an order of finer things from Dharma Trading Co.  This week, I think I'll be taking advantage of a Joann's coupon to get a tambour hook, and I'd also like to offer some manchettes and collars with scalloped edges.

Most shop updates will probably be reported on my Facebook page, rather than here (since they will hopefully be frequent!), so if you're interested and you're not following me there you might want to.
etsy