March 30, 2013
This past week, The Choll (at Thread-Headed Snippet) gave me the Very Inspiring Blogger award.  It means a lot to me!  I know I don't sew very much - and now that I've started a job as a full-time temp receptionist I will probably sew even less, even for my Etsy store - but by posting the Galerie des Modes and other fashion plates and miscellaneous information I do hope to inspire people. 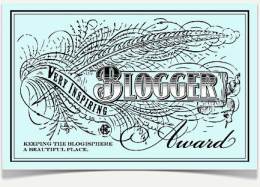 The instructions are to give seven random facts about myself, and then nominate 15 other bloggers who inspire me.

1. I am a very messy person.  My bedroom is just full of stuff (mostly books and clothes), and about half of the family room is covered with supplies and scraps for all the white cotton collars and ruffles and chemisettes I've been making.  I just have a tendency to spread out everywhere and take up all available space.

2. Sansa Stark is my favorite character in all of the A Song of Ice and Fire series, and in Game of Thrones.  I have been known to get into heated debate online over why she is not a spoiled brat who ruins everything.  She is the best, and Sophie Turner is the best, and if HBO or GRRM decided to do a show/book all about her it would just be super.

3. I have the biggest sweet tooth.  I think it's because I'm a supertaster and so desserts are not just good but AMAZING and I must have them.  I generally only make cookies or brownies, though, because it feels harder to justify, like, making a cake for yourself.  I did try to make a Battenberg cake once just for myself but I screwed it up ... royally (hahaha ... nobody else is going to find that funny, are they).

4. I am loving Matt Smith as the Eleventh Doctor, but in some ways I really do think that Christopher Eccleston was the most amazing of New Who.  Matt Smith has boundless energy but to a certain extent it feels like he's not acting so much as being who he is, Tennant seemed to be overacting more and more as he went on, but Eccleston is just the man.

5. Lost in Austen has a lot of flaws, but I really liked how its Darcy was seriously a jerk at first and even the viewer had to dislike him.  (I can find something to like about any adaptation of any book, I think.  Even Howl's Moving Castle, which bore only the slightest resemblance to its source.  It's a talent.)

6. I have over a hundred tabs open in Firefox right now, maybe even over 200.  I know, I know.  I have several groups going, most of them full of fashion plates or whatever that I'm totally going to get back to pinning, and this current one seems to have a lot of blog posts I've been meaning to comment on.

7. In third grade, when we had to do an oral report on anything we wanted, I did one on eighteenth century women's undergarments.  The poster had a woman whose skirt you could fold up to see her hoops.  It gave me a short obsession with drawing a woman in her historical undergarments on one side of a piece of paper and then tracing over them on the other side to show her dress.

And my nominations (five rather than fifteen, but I'm trying to avoid double-nomming):

- Julie at The Fashionable Flower is a great friend of mine, and is responsible for getting me to make anything at all by starting up the Empire State Costumers.  She's an amazing seamstress who even knows the magic art of fitting (something I am not so hot on).

- Mouse Borg Designs is one of those young prodigies that make me feel hopelessly old and hamfisted.  I mean, look at her quilting.  Someday I will quilt a petticoat!

- I haven't been into Regency-proper clothing for a long time, but Kleidung um 1800 has been largely responsible for my increased interest of late, because everything she makes is so unique and vibrant.

- Clara at Things I Vacuumed Today is another great friend, and listen you don't even know how much she inspires me re: at some point getting a permanent job in a museum!  It's almost like being there.

- Costumière hystérique is one of those blogs with just massive amounts of research, and I LOVE IT.  So much!
award