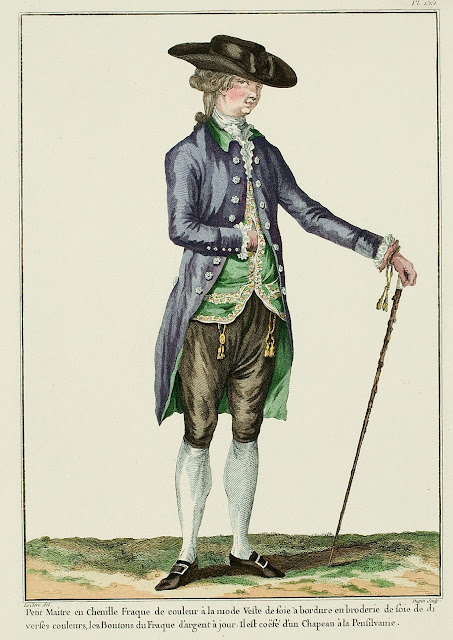 Little Master en Chenille.  Frock coat of a fashionable color.  Silk vest with a border of silk embroidery in diverse colors, the Buttons of the Frock in fashionable silver.  He is coiffed with a Hat à la Pensilvanie. (1780) 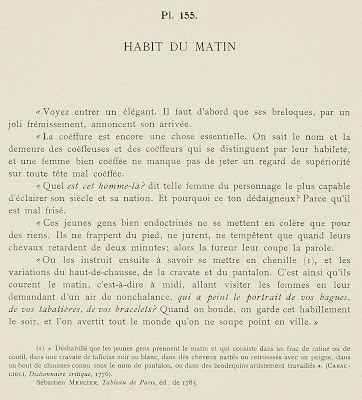 "See an elegant man come in.  It is necessary first that his trinkets, by a pretty tinkling, announce his arrival.

"His coiffure is still an essential thing.  One knows the name and address of the female and male hairdressers who distinguish themselves with their skill, and a well-coiffed woman doesn't lack for throwing glances of superiority on every ill-dressed head.

"Who is that man? says this woman of character, the most capable of illuminating her era and nation.  And why this disdainful air?  Because his hair is badly curled.

"These well-indoctrinated young people only become angry at trifles.  They stamp their feet, they curse, they rant only when their horses are two minutes late; then fury cuts their words.

"They are instructed then to know how to get en chenille,* and the variations of the short breeches, of the cravat and pantaloon.  Thus they run in the morning, that is to say at noon, going to visit women who require an air of nonchalance, who painted the portrait of your rings, your snuffboxes, your bracelets?  When sulking, this dress is kept on in the evening, and everybody is warned that one will not sup in town."

* "Déshabillé that young people put on in the morning and which consists of a rateen or coutil frock coat, a black or white taffeta cravat, hair in a queue or pulled up with a comb, long breeches known under the name of pantaloons, or artistically worked brodequins." (CARACCIOLI, Dictionnaire critique, 1776)
1780s 18th century gentlemen