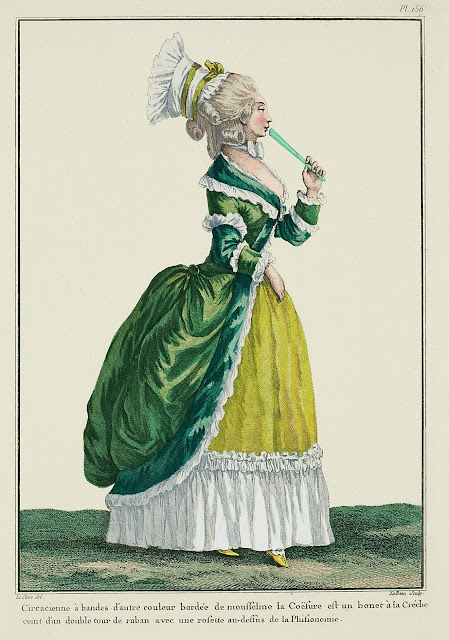 Circassienne with bands of another color, edged with muslin.  The coiffure is a cap à la Créche belted with a double row of ribbon with a bow on top of the Phisionomie. (1780) 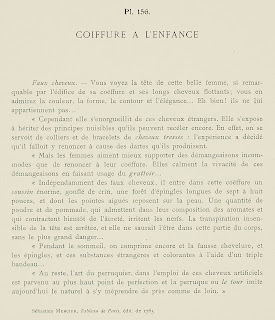 False hair - You see the head of this beautiful woman, if remarkable for the edifice of her coiffure and her long hanging hair; you admire its color, its form, its shape and elegance ... Ah well! they do not belong to her ...

"However, she boasts of her foreign hair.  She exposes herself to receive the injurious principles that they could still conceal.  In effect, one makes use of necklaces and bracelets of braided hair: the experience decided that it was necessary to abandon them because of the sores that they produce.

"But women would rather endure inconvenient itches than abandon their coiffures.  They calm the vivacity of these itches by using a grattoir ...

"Independently of false hair, there is used in this coiffure an enormous cushion, stuffed with horsehair, and a forest of long pins seven or eight inches long, and whose sharp points rest on the skin.  A quantity of powder and pomade which use aromatics in their compositions and which soon contract acridity, irritate the nerves.  The insensitive sweat of the head is stopped, and it cannot be in this part of the body, with the greatest danger ...

"During sleep, one compresses together the false hair, and the pins, and these strange and colored substances with the aid of a triple bandeau ...

"On the rest, the art of the wigmaker, in the use of this artificial hair managed at the highest point of perfection and the wig or tower imitates today the natural hair, to be mistaken from near and far."