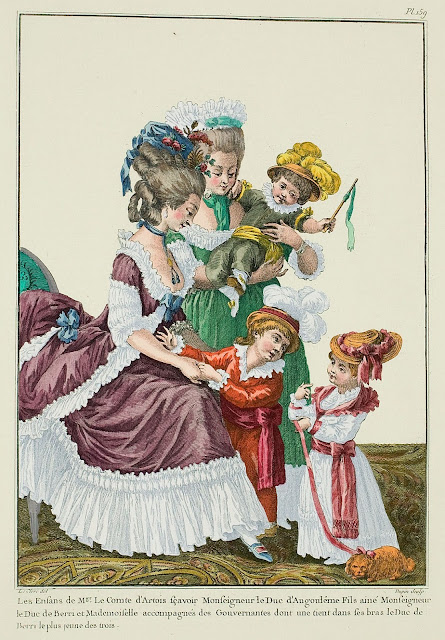 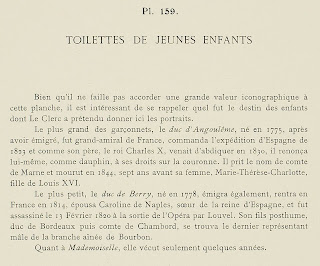 Although it is not necessary to accord a grand iconographic value to this plate, it is interesting to recall what the destiny was of the children whose portraits Le Clerc gave here.

The oldest of the boys, the duc d'Angoulême, born in 1775, after having emigrated, was the grand admiral of France, commanded the Spanish expedition of 1823 and just when his father, King Charles X, abdicated in 1830, he renounced himself as dauphin, his rights to the crown.  He took the name of comte de Marne and died in 1844, seven years before his wife, Marie-Thérèse-Charlotte, daughter of Louis XVI.

The smallest, the duc de Berry, born in 1778, also emigrated, returning to France in 1814, married Caroline of Naples, sister of the king of Spain, and was assassinated by Louvel on February 13, 1820, when exiting the Opera.  His posthumous son, duc de Bordeaux then comte de Chambord, found himself the last male representative of the elder branch of the Bourbons.

About Mademoiselle, she lived only a few more years.