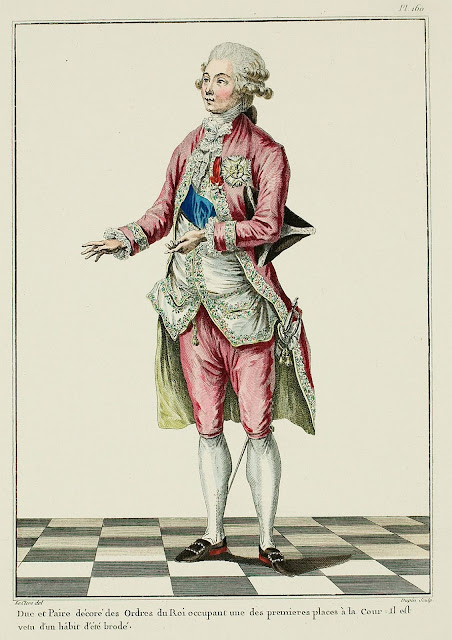 Duke and Peer, decorated with Orders of the King, occupying one of the first places at Court.  He is dressed in an embroidered summer suit. (1781) 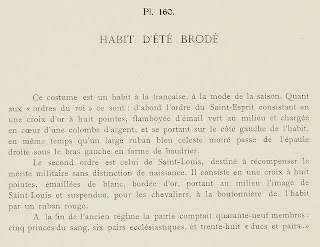 This costume is a suit à la française, in the fashion of the season.  About the "orders of the king", they are: first the order of St. Esprit, consisting of a gold cross with eight points, flaming with green enamel in the middle of and topped en coeur with a silver dove, and is worn on the left side of the suit, at the same time as a wide sky-blue moiré ribbon passes over the right shoulder under the left arm, in the form of a baldric.

The second order is that of St. Louis, intended to reward military merit without the distinction of birth.  it consists of a cross with eight points, enameled with white, edged with gold, holding in the middle the image of St. Louis and suspended, for knights, from the buttonhole of the suit by a red ribbon.

At the end of the ancien régime, the peerage contained forty-nine members: five princes of the blood, six ecclesiastic peers, and thirty-eight "dukes and peers".

[This description was not original to the plate.]