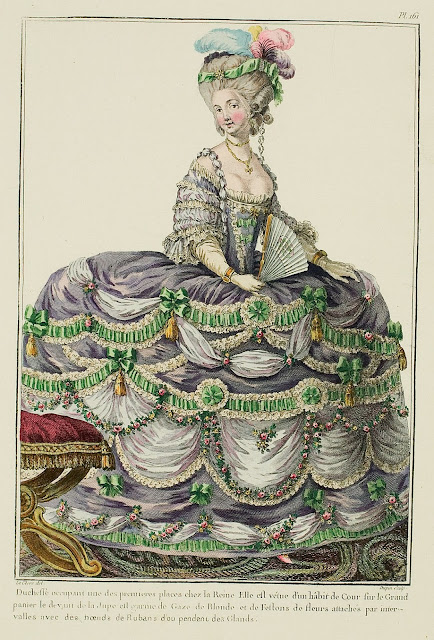 Duchess occupying one of the first places in the Queen's household.  She is dressed in un habit de Cour on the Grand panier. The front of the Petticoat is trimmed with Gauze, Blonde, and Festoons of flowers attached at intervals with bows of Ribbons, from which hang tassels. (1781)


"The court dress or grand habit consists of closed stays, fully boned, and a gown skirt; the stays are covered with the same fabric as the bottom of the gown, the seamstress makes the petticoat, and the marchande des modes adds the pompoms* and trimmings to it.

"The day that a lady is presented at court, her stays, the bottom of her gown, and her petticoat must be black, but all the trimmings are in mesh lace: all the forearms, except the top around the point of the shoulder where the black of the sleeve is seen, is surrounded by two manchettes of white lace, one above the other to the elbow; under the manchette on the bottom is placed a black bracelet of pompoms; all around the top of the stays is a tour de gorge of white lace, on which one wears a narrow black palatine,** trimmed with pompoms, which descends from the collar, and which covers the front of the stays to the waist.  The petticoat and the stays are also trimmed with pompoms made in mesh or black lace.

"The next time she is presented, she wears a dress similar to the first, except that all that was black is changed into a colored or gold fabric.  This is the grand habit for court ceremony." 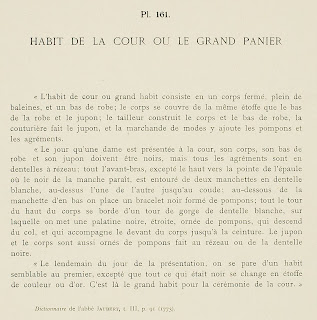