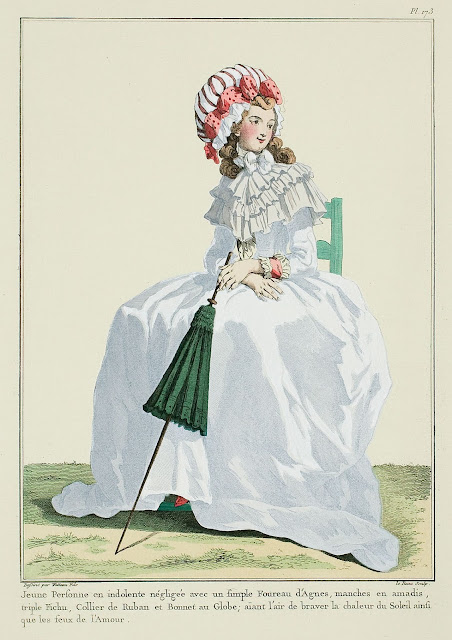 Young Person in indolent négligée with a simple Fourreau d'Agnes, amadis sleeves, triple Kerchief, Ribbon Necklace, and Globe Cap; having an air of braving the heat of the Sun as much as the fires of Love. (1784) 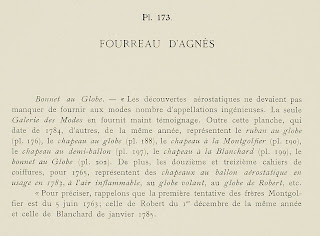 Globe Cap. - "The aerostatic discoveries did not fail to furnish a number of ingenious names for fashions.  The Galerie des Modes alone provides much evidence of this.  In addition to this plate, which dates to 1784, others from the same year show the globe ribbon (pl. 176), the globe hat (pl. 188), the hat à la Montgolfier (pl. 190), the demi-balloon hat (pl. 197), the hat à la Blanchard (pl. 199), the Globe cap (pl. 202).  Furthermore, the twelfth and thirteenth books of coiffures, for [1785], show the aerostatic balloon hats worn in 1783, à la inflammable air, au flying globe, au Robert's globe, etc.

"To be precise, note that the first attempt of the Montgolfier brothers was on the 5th of June [1783]; that of Robert was on the 1st of December in the same year and that of Blanchard in January 1785."

We tend to use the term "fourreau" in relation to the vertical pleats used on the back of a gown, but I find that it appears most frequently in period texts as the name for a child's back-closing gown.  The uses with adult clothing are mostly ambiguous, but in this case it's clearly in reference to a woman's gown with no front opening in the skirt.  It's possible that the bodice fastens in the back, like the children's garment, but this could also be a front-closing gown with an apron-front skirt.

"Agnes" is a character from Moliere's School for Wives, an innocent young girl brought up in a convent, so this dress might be intended to evoke charming simplicity.  I haven't found any other likely Agnes to have lent her name to the gown, but perhaps I will come across one while researching something else in the future.