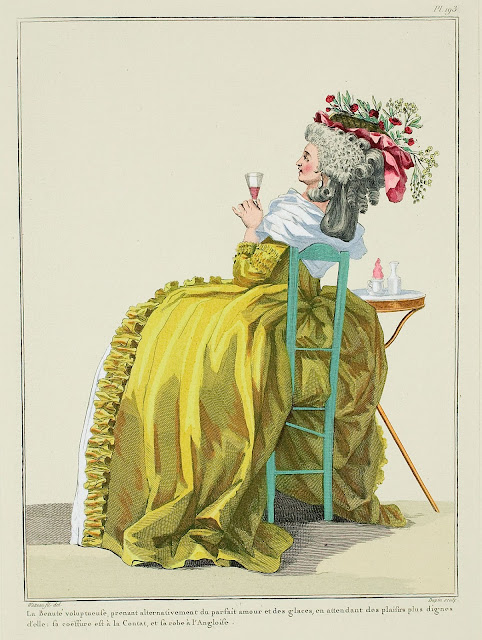 The voluptuous Beauty, taking alternately perfect love* and ices, waiting for pleasures more worthy of her: her coiffure is à la Contat,** and her gown à l'Anglaise. (1784) 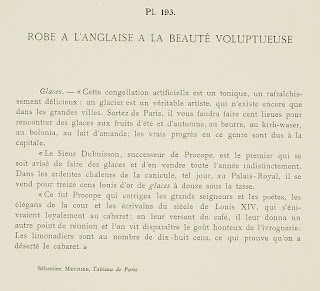 Ices. - "This artificial frozen treat is a tonic, a delicious refreshment: a ice-maker is a veritable artist, who only still exists in the great cities.  Outside of Paris, you must travel a hundred leagues to meet with summer- and autumn-fruit ices, butter ices, kirh-waser ices, bologna ices, almond-milk ices: the true progress in this is made in the capital.

"Sieur Duboisson, successor to Procope, is the best who is advised to make ices and sell them all year round.  In the ardent heat of the dog days, at the Palais-Royal, he sells ices for thirteen hundred louis d'or per dozen in cups.

"It was Procope who corrected the great lords and poets, the elegants of the court and the writers of the age of Louis XIV, who loyally became drunk at the cabaret: filling them with coffee, he gave them another meeting place and one saw the disgraceful taste for drunkenness disappear.  The lemonade sellers number eighteen hundred, which proves that the cabarets are deserted."

* a type of liqueur
** a reference to Louise-Françoise Contat, the actress who played Suzanne in The Marriage of Figaro, which premiered in 1784 and sparked a frenzy of fashions
1780s 18th century anglaise Galerie des Modes