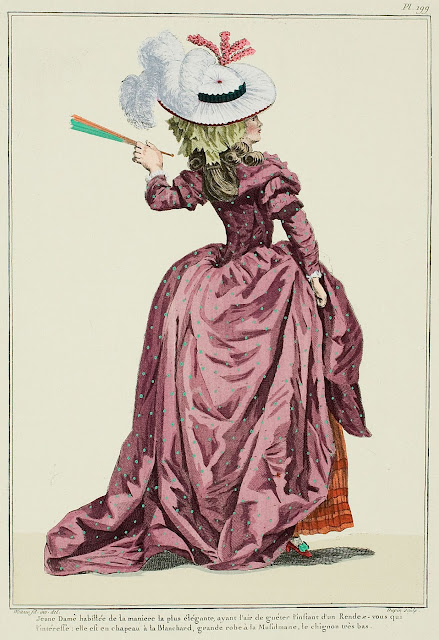 Young Lady dressed in the most elegant manner, having the air of watching for the instant of a Rendez-vous which interests her: she is in a hat à la Blanchard,* full robe à la Musulmane, the chignon is very low. (1784) 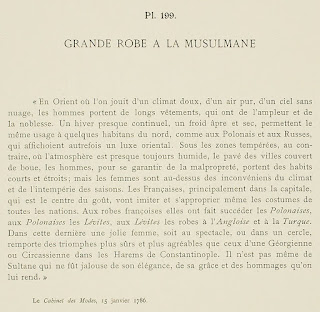 "In the Orient, which has a sweet climate, pure air, a snow-less sky, men wear long garments which have fullness and nobility.  An almost continual winter, a bitter and dry cold, permit the same dress in a inhabitants of the north, like the Poles and Russians, who once displayed an oriental luxury.  In the temperate zones, to the contrary, where the atmosphere is nearly always humid, the city cobbles covered with mud, the men, to protect them from impropriety, wear short and narrow outfits, but women are above the inconveniences of the climate and the intemperacy of the seasons.  Frenchwomen, principally in the capital, which is the center of taste, will imitate and appropriate even the costumes of every nation.  The françaises have been succeeded by the Polonaises, the Polonaises by the Lévites, the Lévites by the robes à l'Anglaise and à la Turque.  In this latter fashion a pretty woman, whether in a show or in the seats, wins triumphs surer and more agreeable than those of a Georgian or Circassian woman in the Harems of Constantinople.  Even the Sultana was jealous of her elegance, her grace, and the homages that were made to her."

* The two Blanchards I think are the most likely to have inspired this hat's name.  The most likely is Jacques Blanchard (1600-1638), as the plumes hint at historicism; the other is Jean-Pierre Blanchard (1753-1809), as he was involved with early balloon aviation, which has already been shown to have influenced at least the names of styles.
1780s 18th century Galerie des Modes