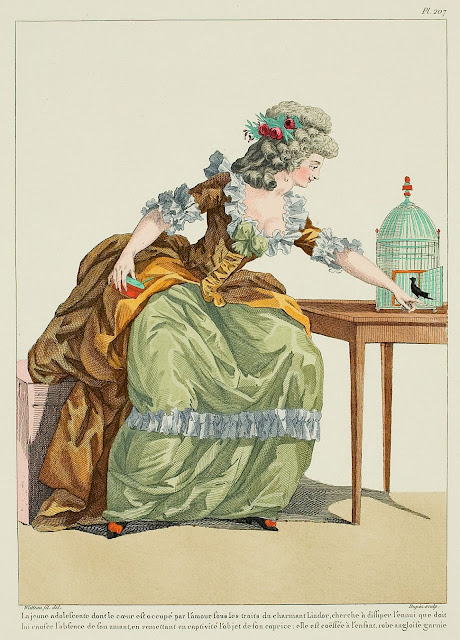 The young adolescent whose heart is occupied by love under the traits of the charming Lindor, searches to dissipate the ennui that must be caused to her by the absence of her love, in returning to captivity the object of her caprice: she is coiffed à l'enfant, trimmed robe anglaise. (1785) 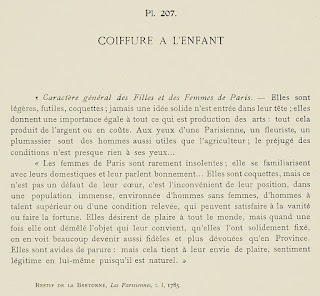 "General character of the Girls and Women of Paris. - There are light, frivolous, flirtatious; never has a solid idea entered their heads; they give an equal importance to everything which is a production of the arts: everything that makes money or costs it.  To the eyes of a Parisian woman, a florist, a feather-merchant are men as useful as the agriculturist; the prejudice of rank is almost nothing to her eyes ...

"The women of Paris are rarely insolent; she is familiar with her servants and speaks well to them ... They are flirtatious, but this is not a defect of their hearts, it is the inconvenience of their position, in an immense population, surrounded by men without women, men with a superior talent or an elevated rank, who can satisfy vanity or make a fortune.  They desire to please everyone, but when once they have untangled the object which suits them, that they are solidly fixed on, one sees many becoming as faithful and more devoted than the women in the Province.  They are eager for adornment: but that stems from their desire for pleasure, a legitimate sentiment in itself as it is natural."