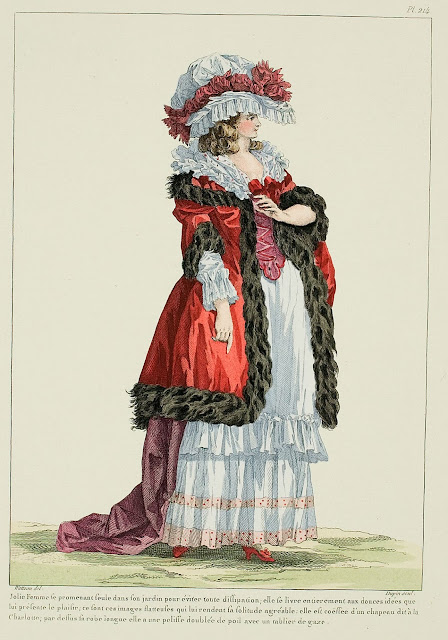 Pretty Woman walking alone in her garden to avoid all dissipations, she engages herself entirely with sweet ideas that pleasure presents to her; this makes these flattering images which render her an agreeable solitude: she is coiffed with a hat called à la Charlotte; over her long gown she has a pelisse lined with fur with a gauze apron. (1785) 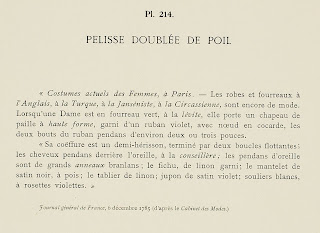 "Women's actual outfits, in Paris. - The gowns and fourreaux à l'Anglaise, à la Turque, à la Janseniste,* à la Circassienne, are still in fashion.  When a Lady is in a green fourreau, à la levite, she wears a straw hat with a high crown, trimmed with a violet ribbon, with a cockade bow, the two ends of the ribbon hanging about two or three inches.

"Her coiffure is a half-herisson, ended by two hanging curls; the hair hanging behind the ears, à la conselliere: the earrings are large, trembling rings; the kerchief, of trimmed linen; the mantelet of black satin, spotted; the apron of linen; petticoat of violet satin; white shoes, with violet rosettes."

* Jansenism, originating in the 17th century, was a flavor of Christianity similar to Calvinism.  By the 1780s it had mostly died out as a sect.