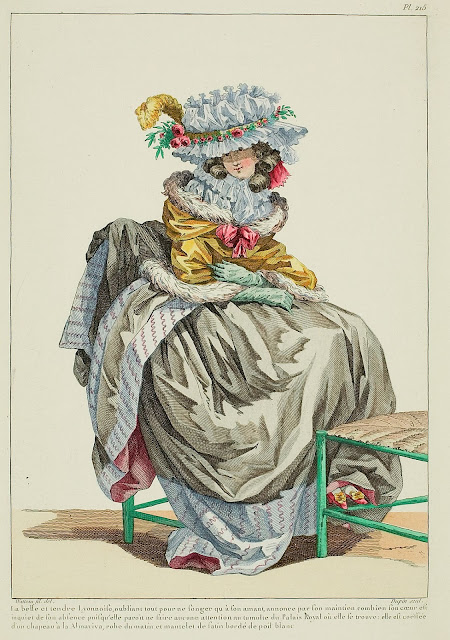 The beautiful and tender woman from Lyons, forgetting everything in order to reflect only on her lover, announces by her bearing how much her heart is worried by his absence as she seems to pay no attention to the tumult at the Palais-Royal where she is found: she is coiffed with a hat à la Almaviva,* morning gown and satin mantelet bordered with white fur. (1785) 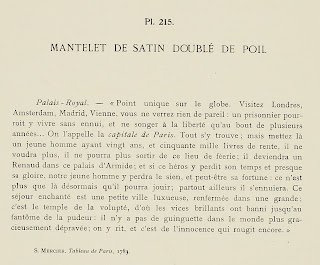 Palais-Royal. - "A unique point on the globe.  Visit London, Amsterdam, Madrid, Vienna, you will see nothing to match it: a prisoner could live there without boredom, and only consider freedom at the end of several years ... It is called the capital of Paris.  Everything is found there; but set a young man of twenty years there, with fifty thousand livres a year, he would want no more, he could no longer go out of this place of faerie; he would become a Renaud in this palace of Armide; and if this hero lost his time there and almost his glory, our young man will lose his health, and maybe his fortune: it is only there that he could play henceforth; everywhere else he would become bored.  This enchanted sojourn is a little luxurious city, enclosed in a large one: it is the temple of the voluptue, where the brilliant vices have banned even the ghost of modesty: there is no tavern in the world more graciously depraved; one laughs there, and it is innocence which still blushes."

* Count Almaviva is Figaro's employer, who is trying to seduce Suzanne, Figaro's bride-to-be.