(** and until I start patterning outerwear and underwear, so maybe this was a poor choice of title)

I actually made a visit prior to this one that was intended to be the last, but it transpired that I could not pattern four gowns and a petticoat in a day, so the second round of New York State Historical Association (at the Farmer's Museum) patterning took two visits.  Since I never posted about the last one, I'll condense them here. 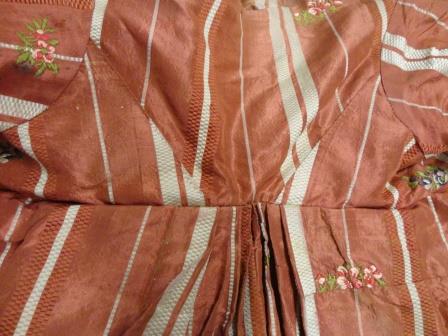 This is (the back of) a gown for a quite pregnant woman.  In my opinion, it was cut down from a gown or sacque that was made in the mid-to-late 1770s to fit with the styles of the late 1790s - I would have simply considered it a fashionable update, except that there are a few aspects that are decidedly unfashionable and the front shaping implies that it's for maternity wear.  And there's a small housewife sewing kit made of the same silk, which I patterned as well. 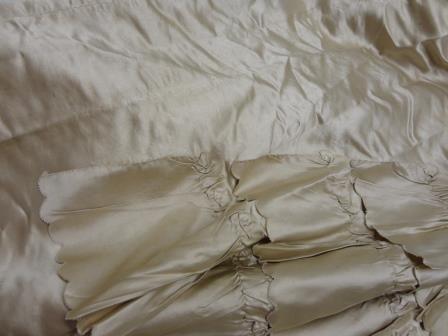 Satin is such an amazing weave structure - the few 18th century silk satin garments I've encountered have been in excellent condition, supple and soft, which makes patterning them just a little easier.  And this satin sacque with matching petticoat (petticoat detail above) also has a solid provenance tying it to a wedding, and therefore a good date.  With several self-fabric serpentine trims and three volants, it is a very, very formal ensemble. 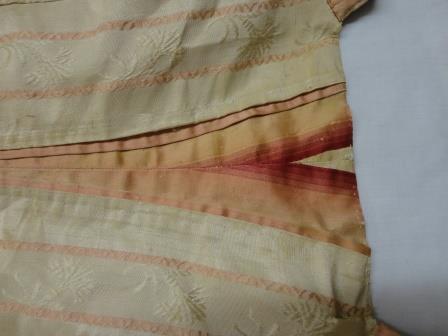 At first, I thought that this was a fairly ordinary gown - but I pattern everything in order to figure out exactly what's going on with it and to see if there's anything at all of interest.  I can definitely tell you that this is not your average anglaise, and I don't believe I've seen a pattern anywhere that involves a back quite like this one.  The reasoning and cutting is somewhat specific to this particular fabric (which you can see involves multiple kinds of stripes), but could be adapted to different patterns. 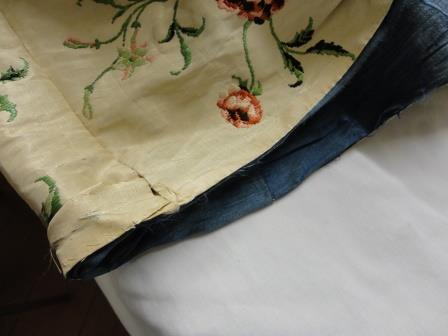 Strictly regarding aesthetics, this might be my favorite of all the 18th century garments I've patterned.  This is a brocaded mantua, ca. 1760 - one of the older garments in the book.  There are some very strange aspects to this one that bear some more thought and research and which I will not go into now, but a very beautiful unusual aspect is the deep blue silk lining of the skirt.  (The bodice lining is an extremely fine, light linen.)  That is not something you see every day.