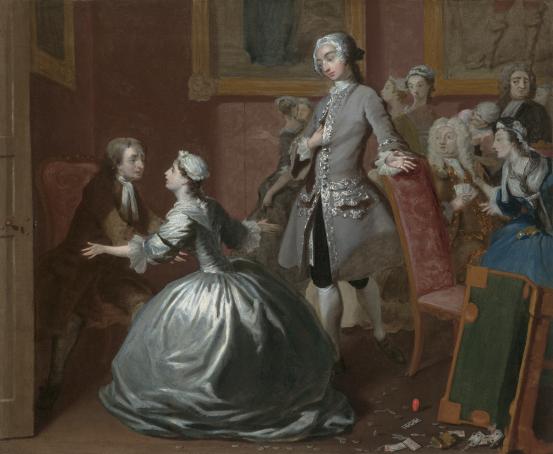 Driven to a frenzy, Mr. B attempts to find any letters to her family that Pamela has secreted on her person, asking if they are inside her stays or pockets and threatening to strip her; he starts to unpin her handkerchief and then to check her garters, but then allows her, due to her begging and crying, to go up to her bedroom and bring them down.  She writes him a note to give her until the next day, then sits down and unstitches them from her underpetticoat.

As he reads them, Mr. B finally says that she can go home to her family - but while traveling back, Pamela realizes that she is in love with her captor, and is given a letter where Mr. B confesses his own love and asks her to come back to marry him.  Are we surprised when she does?

Mrs. Jewkes comes out with "her clothes huddled on" and tells Pamela that Mr. B is ill; Pamela's return of course brings about an improvement in his condition, and when he is well he pulls out a letter case and shows her a note from Lady Davers, his sister.  To summarize it: it is wrong for him to turn their mother's favorite maid into a kept woman, and it is also wrong for him to create an unequal match for himself and bring a servant girl into their ancient family.

In preparing to go out with Mr. B in his carriage, she considers putting on her "best silk nightgown", but in the end, both of them wish her to keep wearing her maid's clothing - it represents simplicity, a lack of guile and artifice.


I will beg of you, sir, not to let me go very fine in dress; but appear only so, as that you may not be ashamed of it after the honour I shall have of being called by your worthy name: for well I know, sir, that nothing so much excites the envy of my own sex, as seeing a person above them in appearance, and in dress.


I am obliged to you, Pamela, said he, and pray be only dressed as you are; for [the two young women who are curious about her] know your condition, and I have told them the story of your present dress, and how you came by it, one of the young ladies begs it as a favour, that they may see you just as you are: and I am the rather pleased that it should be so, because they will perceive you owe nothing to dress, but make a much better figure with your own native stock of loveliness, than the greatest ladies arrayed in the most splendid attire, and adorned with the most glittering jewels.

They discuss what her place could be in society and in his household, and she asserts that she will not mind any barbs aimed by great ladies, and she will simply be the mistress of his house, doing the accounts and making "all the fine linen of it for yourself and me".  Later, he asks if she wants to order "clothes against her marriage", and she leaves it up to him, asking that they not be "too fine".

They are visited by a few of the local gentry, Pamela is "not dressed in some of my best clothes" despite the previously-mentioned young ladies being "dressed in their best attire".  There is much talk of how charming Pamela is in her plain dress, they drink a few glasses of sack, and it is remarked that she will "adorn ... her distinction".  There is a knock at the door, and a servant tells Mrs. B - Pamela's father is admitted!  He, like Pamela, is humble and doesn't wish to appear in company, but he is brought in and the pictured scene occurs. 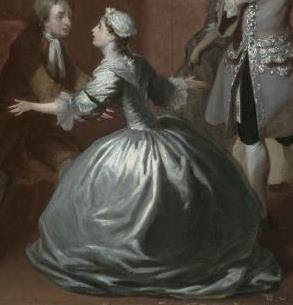 In the painting, Pamela is dressed in a grey silk gown, rather than the humble homespun she is described as wearing in the book. One can only speculate on why the artist prefers to show Pamela dressed well - my guess would be that the idea of the humbly-dressed and pure young woman comes across very well as an ideal, but that Pamela painted in her brown gown is not as arresting or noticeable a figure as Pamela in a lighter, shiny silk gown. Additionally, she has a small cap on the top of her head, rather than the larger, more enveloping cap associated with her servants' dress, as well as muslin ruffles on her shift sleeves and a small muslin tucker.

Mr. B is dressed very well, in a grey that complements Pamela's gown. His silk coat is heavily trimmed with silver lace. Only a sliver of his waistcoat can be seen, but it seems to be white or a lighter grey; his breeches are black.

His pose - hand inside his coat - is of course most closely associated with Napoleon Bonaparte, but was very common for well-bred men in portraiture. 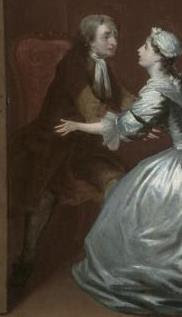 Mr. Andrews is dressed in brown, probably wool, like Pamela's old gown. His stockings appear to be either a natural mix of wool or very dirty; his cravat is simply tied once and allowed to hang down the front of his coat. And his hair is, of course, long and unpowdered (but greying).

I knew the voice, and, lifting up my eyes, and seeing my father, gave a spring, overturned the table, without regard to the company, and threw myself at his feet.

The company behind the abandoned card table is dressed very well, but do not look like they are portrayed sympathetically. There is a man in an old-fashioned long wig and a brown silk suit trimmed with gold lace, holding his cards and looking down his nose at the goings-on. Next to him, with a pinched expression on her face, is a woman in a blue gown. Her cap is closer to a turban than an ordinary pinner cap, and her kerchief is untucked from her gown on one side. Around her neck she is also wearing a black bouffant, which is tucked into a silver/grey band holding the front of her gown together. I believe there is a chatelaine or some sort of bauble at her waist.