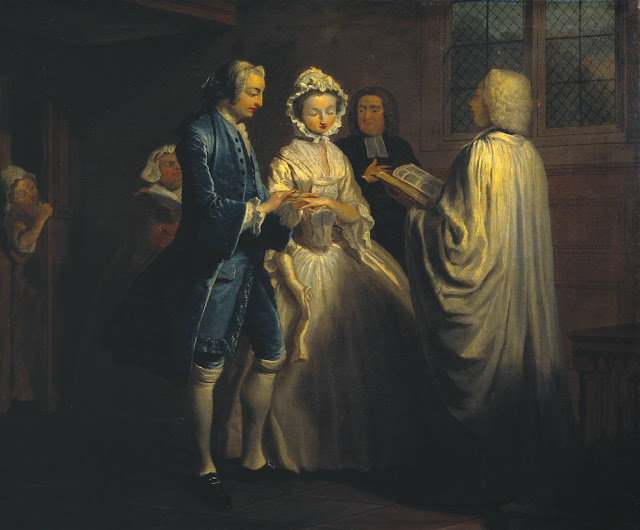 Because Mr. B really isn't supposed to marry Pamela, they need to hide their relationship for a while. He asks her to "dress as [she] used to do; for now, at least ...", which I believe means as she dressed when she was working for his mother, before she decided to retreat back into homespun to prove her virtue. She then goes back to her room and changes her outfit completely:


... and so put on fine linen, silk shoes, and fine white cotton stockings, a fine quilted coat, a delicate green Mantea silk gown and coat, a French necklace, and a laced cambric handkerchief, and clean gloves; and, taking my fan in my hand, I, like a little proud hussy, looking in the glass, and thought myself a gentlewoman once more ...


When she returns, she is in fact so radiant that her father doesn't recognize her, and suspects for a moment that Mr. B is just making fun of Pamela and is actually marrying "some fine lady". They all get in the carriage to drive off - Mr. B letting the other two sit "foreside" while he has his back to the horses, which is very polite of him - to make up with Mr. Williams (the chaplain, who was out of the story for pages and pages) and bring him back for dinner. Mr. B continues in his kindness to Pamela's father by giving him some clothing to wear at chapel the next day:


He carried him up the stairs, and shewed him several suits, and would have had him take his choice. ... And, my good master, at last, (he fixed his eye upon a fine drab, which he thought looked the plainest,) would help him try the coat and waistcoat on himself; and, indeed, one would not have thought it, because my master is taller, and rather plumper, as I thought but, as I saw afterwards, they fitted him very well. And being plain, and lined with the same colour, and made for travelling in a coach, pleased my poor father much. He gave him the whole suit, and, calling up Mrs. Jewkes, said, Let these clothes be well aired against tomorrow morning. ... He was then pleased to give him the silver buckles out of his own shoes.

After Sunday chapel the next morning, they sit down to dinner, Pamela noting that she is dressed in "a flowered satin, that was my lady's, and looked quite fresh and good, and which was given me, at first, by my master; and the ladies, who had not seen me out of my homespun before, made me abundance of fine compliments, as soon as they saw me first." There follows a very long conversation on psalms, and then a long conversation about when Pamela will fix the secret wedding date (in which nothing is decided anyway, but a while later she picks that Thursday).

When Mr. Andrews leaves for the family home, he tells Pamela that he will not "be seen in [his new clothes] in his neighborhood, till I was actually known, by every body, to be married; nor would he lay out any part of the twenty guineas [that Mr. B gave him for clothes for himself and his wife] till then neither, for fear of reflections" - Pamela's situation is still precarious, and extremely open to misinterpretation. Until she's actually married, any advantages that she or her family get from Mr. B look mainly like payment for prostitution to their contemporaries.

Pamela spends the first half of the week going for drives and talking with Mr. B, and in reflecting at length on what her conduct should be. Her low position preys frequently on her mind: his sister, Lady Davers, is still very much opposed to the match, and Pamela is also bothered by the fact that she brings nothing to the marriage and there are no documents to be signed about properties and settlements.

On Thursday morning, after a sleepless night, she is dressed and goes out with Mr. B, Mr. Williams, Mrs. Jewkes, and Mr. Peters on the pretense of looking at the chapel. Mr. Williams performs the service, the maid Nan watches at the door, and the others act as witnesses. Once the marriage has taken place, Mrs. Jewkes brings out "a large silver tumbler, filled with sack, and a toast, and nutmeg, and sugar," and Mr. Williams is given a living and a £50 note. A happily ever after, about 65% of the way through the book!

Although Pamela's wardrobe is usually described in detail, her wedding outfit is described only as "a rich white satin night-gown, that had been my good lady's, and my best head-clothes, etc." The gown does have a satiny sheen, although it looks more ivory than white here. Interestingly, her cap is the more old-fashioned/working-class style than the one she wore to meet her father. Is this a choice on the part of the artist to make her appear more modest, a close interpretation of the text (as she was pretending not to be going to her wedding), or a reflection of contemporary habits?

She also has on a pair of satin gloves, a long apron, and a kerchief held in place by a satin band.

As usual, Mr. B's suit matches entirely, each piece being dark blue. It is relatively plain, compared to some of the outfits he's worn in the Pamela paintings - the only trim is a border of some darker blue, possibly a wide silk braid or a damasked silk. His stockings are pulled up over the bottom of his breeches. His hair is lightly powdered and pulled back into a queue, with a curl on either side of his face.