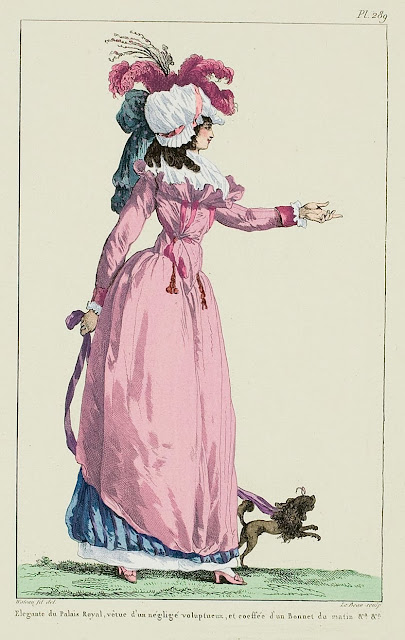 Elegante of the Palais Royal, dressed in a voluptuous négligé, and coiffed with a morning Cap, &c. &c. 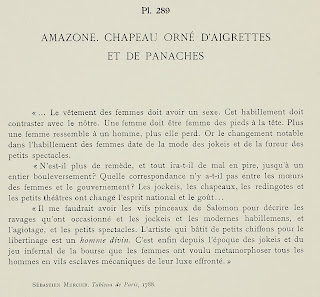 "... Women's dress must have a sex. This dress must contrast with ours. A woman must be a woman from head to toe. The more that a woman resembles a man, the more she loses. The significant change in women's dress dates from the fashion of the jockeys and the fury of the little spectacles.

"Is there no remedy, and will it go from bad to worse, until there is a full revolution? What correspondence is there between women's mores and the government? Jockeys, hats, redingotes, and the little theaters have changed the national spirit and taste ...

"I would need to have the sharp brushes of Solomon to describe the ravages which have occasioned from the jockeys and modern dress, and the stock-buying, and the little spectacles. The artist who bastes the little chiffons for their libertinage is a divine man. Finally, it is since the epoch of the jockeys and the infernal game of the stock exchange that women have wanted to change men into vile mechanical slaves of their brazen luxury."