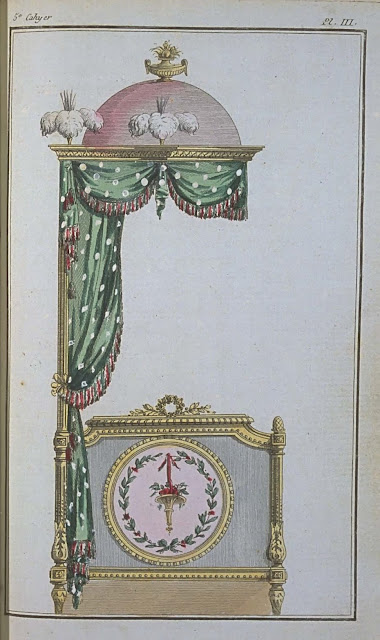 The Wood, the curtains, the panaches are the same.

In place of the iron Curves, there are rising columns which support the dome. 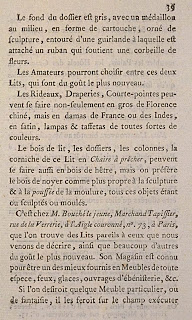 The Cap is surmounted by a vase.

The Cornice, together with the headboard, is sculpted in another fashion.

The background of the headboard is grey, with a medallion in the middle, in the shape of a cartouche, decorated by sculpture, surrounded by a garland to which is attached a ribbon which supports a basket of flowers.

Fans could choose between the two Beds, which are of the newest taste.

The Curtains, Draperies, Testers can be made not-only in mottled gros de Florence, but in French or Indian damask, in satin, lampas, and taffeta of all sorts of colors.

The wood of the bed, the headboards, the columns, the cornice of the Preacher's Pulpit Bed, could be made also in beech wood, but walnut is preferred as the most proper for the sculpture and thrust of the molding, all these objects being sculpted or molded. 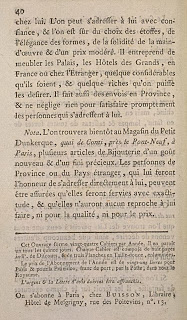 It is at the shop of M. Bouché the younger, Master Upholsterer, rue de la Verrerie, at the crowned Eagle, no. 73, in Paris, where Beds are found matching those that we just described, together with many others of the newest taste. His Shop is known to be one of the best-stocked with Furniture of every type, lights, mirrors, works of cabinetry, etc.

If one desires some particular or fanciful piece of Furniture, he would make it for them in the workspace at his shop. He can be contacted with confidence, and one is sure of the choice of materials, of the elegance of the forms, of the solidity of the workmanship, and of a moderate price. He undertakes the furnishing of the Palace, the Hôtels de Grands, in France or in Other countries, some considerable ones that they are, and some rich ones that one could desire. He also makes dispatches to the Provinces, and never neglects to promptly satisfy the people who contact him.

Note. One will find seen at the Shop of the Little Dunkirk, quai de Conti, near the Pont-Neuf, in Paris, several articles of Jewelry of a new taste and a precious finish. People of the Provinces or foreign Countries, who make him the honor of contacting him directly, can be assured that they will be served with exactitude, and that they will have no reproach for him, for the quality nor the price.