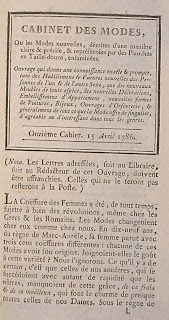 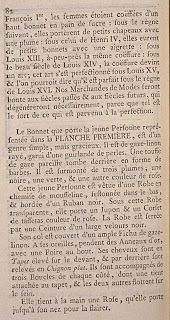 Women's Coiffure has been, in all times, subject to revolutions, even in the times of the Greeks and Romans. Fashions changed then as now. In nineteen years, in the reign of Marcus Aurelius, his wife appeared with three hundred different coiffures: each one of these Fashion had its origin. Did they join taste to this variety? We ignore that. What is for certain, is that those of our ancestors, which succeeded each other with as much rapidity as ours, lacked this grace, of this freshness and this softness, which makes the charm of almost all those of our Ladies. In the reign of François I, women were coiffed with a high sugarloaf cap: in the following reign, they wore little hats with a feather; in that of Henri IV, they had little caps with an aigrette: under Louis XIII, nearly the same coiffure: in the beautiful age of Louis XIV, coiffure became an art; this art was perfected under Louis XV, and one could say that it is perfect in the reign of Louis XVI. Our Marchandes des Modes will shame past and future ages, which will necessarily degenerate, because such is the type of that which has become perfection.


The Cap which the young Person represented in the FIRST PLATE wears, is of a simple but graceful type. It is of striped linen-gauze, trimmed with a pearl garland. A tuft of matching gauze falls behind in the shape of lappets. It is surmounted by three plumes; one black, one green, and another pink.

This young Person is dressed in a Robe en chemise of muslin, scalloped at the bottom, and edged with a black ribbon. Under this transparent Gown, she wears a Petticoat and a Corset of pink taffeta. The Gown is tightened by a Belt of a wide black velvet

Her neck is covered with a full Kerchief of linen-gauze. In her ears, hang gold Rings, with a Pear-shaped jewel at the end. Her hair is in a raised Tapet in the front, and in the back is pulled up in a flat Chignon. They are accompanied by three Curls on each side, one of which is attached to the tapet, and the other two hang on the chest.

She holds in her hand a Rose, that she carries to her nose to smell.