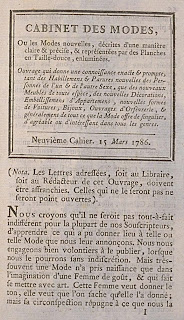 WE believe that the majority of our Subscribers would not be entirely indifferent, to learning what could give rise to this or that Fashion that we announce to them. We commit ourselves very willingly to publishing it, when we can do it without indiscretion. But very-often a Fashion only was birthed in the imagination of a Woman of taste, and who makes it with art. This Woman wants to give the ton, she wants people to be vexed that she has given it; but her circumspection revolts at our naming her as the author. Thus it is only permitted for us to describe this Fashion.
---
Last Thursday, the brilliant Céphise* conquered at the Théatre Française, in a Parure where art shamed richness. All eyes left the scene for a moment to turn towards her. Women, a little jealous, examine, in going out, in the vestibule, the elegant toilette that had been able to fix all eyes. They could not avoid admiring it; they agreed that it had merit; and the next day, they are shown, for the most part, in the same Outfit. 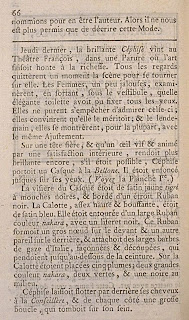 On a proud head, and that a bright eye, animated by an interior satisfaction, rendered still more brilliant, if it were possible, Céphise wore a Casque à la Bellone.** It was pushed over the eyes. (See the Ist Plate.)

The brim of the Casque was of yellow satin streaked with black spots, and edged with a narrow black Ribbon. The Crown, rather high and puffy, was of blue satin. It was wrapped with a wide nakara ribbon, with a black selvage. This Ribbon formed a large bow in the back, and held wide lappets of Italian gauze, shaped and pinked, which hung to below the belt. On the Crown were placed five plumes; two large nakara ones, two green, and one black in the middle.

Céphise allowed her hair to float behind her à la Conseillère, and on each side a large curl, which fell on her chest. 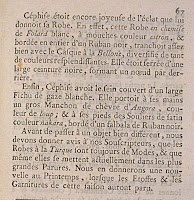 Céphise was still joyous of the sparkle that the Gown gave her. In effect, this Gown en chemise of white Foulard, with lemon spots, and edged entirely with a black ribbon, contrasted rather well with the Casque à la Bellone, diversified with such resplendent colors. It was tightened by a wide black belt, forming a bow in the back.

Finally, Céphise's chest was covered with a large Kerchief of white gauze. She wore on her hands a large Muff of Angora goat, wolf-colored; and on her feet were Shoes of nakara satin, edged with a frill of black Ribbon.

Before passing to a different subject, we must advise our Subscribers, that the Robes à la Turque are still in Fashion, and that they even are currentlyworn in the grandest Parures. We will give a new one in the Spring, when the Fabrics and Trimmings of this season have appeared.

* "Céphise" was used as a name for a woman in a Galeries des Modes fashion plate. It's possible that that was meant to refer to this actress, and that the other names used for the subjects of other plates refer to other actresses, and that the outfits in those are what they wore onstage.

** Bellona, a warrior goddess depicted in a helmet