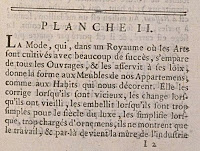 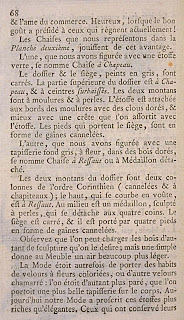 Fashion, which, in a Kingdom where the Arts are cultivated with much success, takes over all Crafts, and enslaves them to its laws, gives shape to the Furniture of our Apartments, as to the Coats that decorate us. It corrects them when they are vicious, changes them when they are old, embellishes them when they are too simple for the age of luxury, simplifies them when, too full of ornaments, they only show the work, and there becomes the mother of industry and the soul of commerce. Happy, when good taste has presided over those who actually reign!

The Chairs that we represent in the Second plate, enjoy this advantage.

The one, that we have drawn with a green fabric, is called a Hat Chair.

The back and the seat, painted in grey, are squared . The upper part of the back has a Hat, and flattened arches. The two vertical sections are molded and pearled. The fabric is attached at the edges of the molding with gilded nails, and best with a crest that matches the fabric. The feet which carry the seat, are in the form of channeled shafts.

The other, that we have drawn with a tapestry with a grey ground, flowered, in gilded wood, is called a Projection Chair or a Detached medallion Chair.

The two vertical sections of the backrest are two Corinthian columns (channeled and with capitals); the top, which is curved in a vault, is Projected. In the middle is a medallion, sculpted with pearls, which is separated into four corners. The seat is square, and it is carried by four feet in the form of channeled shafts.

Observe that one can load the wood with as much sculpture as one desires; but a simple design gives to the Furniture a much lighter air. 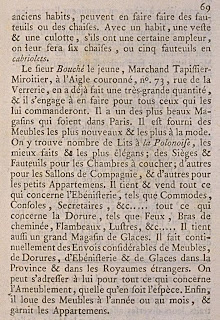 The Fashion was at other times to wear coats of velvet with colored flowers, or of other decorated velvets: one was even more adorned than if one wore a more beautiful tapestry on the body. Today our Fashion has proscribed these more rich than elegant fabrics. Those who have retained their old coats, can use them to make armchairs and chairs. With a coat, a waistcoat, and breeches, if they have a certain fullness, they can make six chairs, or five cabriolet armchairs.

M. Bouché the younger, Tapestry Merchant-Mirrorer, at the crowned Eagle, no. 73, rue de la Verrerie, has already made a very great quantity, and he is engaged to make them for all who order them from him. He has one of the most handsome Shops in Paris. He is furnished with the newest and most fashionable Furnitures. One finds a number of Bed à la Polonaise, the best made and the most elegant; Seats and Armchairs for sleeping Chambers; others for Company Salons, and others for little Apartments. He has and sells everything that concerns Cabinetry, such as Commodes, Consoles, Secretaries, etc. ... everything that concerns Gilding, such as Lamps, Chimney arms, Candlesticks, Chandeliers, etc. ... He also has a large Shop of Mirrors. He continually makes considerable Shipments of Furnitures, Gildings, Cabinetry, and Mirrors in the Provinces and in foreign Kingdoms. One can write to him for everything that concerns Furnishing, which is a type of it. Finally, he leases Furniture by the year or month, and dresses Apartments.