If someone complains of the great variety of Fashions, of the great rapidity with which they succeed each other, and of the expense that they seem required to entail, because there is not time to wear its coats, and it is necessary to replace them all of a sudden with others; he may expect, and he may do what Novelty (1) prescribes to this old Baron, who is all astonished that at the end of forty years his coats are already out of fashion, and that at Court they laughed in his face because of his grotesque dress; he will see that soon the coat he wears today, and that he believed passé, will be of a reigning Fashion, and that he will not be required to spend as much as he thought. Coats with piped linings, which seemed never to be brought back, are at present Fashionable, and of the most recent and most followed Fashion.

It is yet necessary to observe that one does not wear, as at other times, all sorts of linings indifferently under all sorts of coats. Each coat color has a lining color that goes with it, and which it is necessary to make sure to use, if one doesn't want to spread this discordance and confusion of colors in coats, which they rejected in earlier times the current Fashion with a type of hatred and contempt. HERE ARE THE LAWS THAT MUST BE FOLLOWED. With all coat colors, use a white lining, with piping, and you will be perfectly fashionable. Your coat, if it is puce, brown, chestnut, Monsieur's prune, violet, carmelite, use a pale yellow lining, and only that. Avoid the dark green, the Sky blue, and the pink which were previously used; these colors do not ally well, and please the eye, which must always flatter. I see on you a King's blue coat, with a scarlet lining: well, very-well. Time, which changes everything and destroys everything, still has never touched these two colors together; proves unequivocally that they go together perfectly. Whether the blue is over the scarlet, under it, it is not important. There is now a manner of wearing these coats, that we rather love; it is to wear them all matching, without braid, without yellow or gilded buttons; in a word, with matching buttons. In this case, it is better for the blue cloth to be on top.

You can put dark green under a King's blue, scarlet under a Dragoon green, lilac under a water green, straw under an American grey, but after that, under all the other colors, we only see white which can agree, if there is not yet the matching lining. What other, in effect, would you put with grey-white, with yellow, with lilac, with chamois, with slate grey, with ice blue, and other colors?

See the young Man we have drawn in the 1ST PLATE; he is covered with a Coat of scarlet colored cloth, with a lining of white silk with piping.* We will advise you to most often put white under scarlet. While blue accompanies it rather well, it doesn't give this sweetness to the eye, this mellowness, this ability to match that white gives it. It contrasts better; but it perhaps doesn't go absolutely as well. It is a nuance that the taste of each person must seize according to what agrees with them.

The Coat of the young Man is trimmed with large white buttons in mother-of-pearl. The ends of the sleeves are open à la Marinière, and two matching buttons hold them closed a little above on the sides. Four other buttons, also matching, are attached to the bottom of the flaps of the pockets. The collar of the Coat is of the same cloth, and is no longer diversified as it was some time ago.

The young Man wears under his Coat a Gilet of Gros de Tours, water green ground, with gold stripes, and trimmed with little white buttons

His Breeches are of a Cashmere cloth, of a pale lemon color; his silk Stockings are white. We have observed that only white Stockings properly accompany  these Breeches, and that blue, grey, mixed Stockings contrast too strongly. His silver shoe Buckles are ovals with cut angles.

His head is covered with a Hat à l'Androsmane, which hides a long grecque protruding a little in the back. On each side he wears four curls, three below and one on top, and behind a long queue, well tied down to the end of the hair. He holds a Bamboo Cane in his hand, and he is represented going down by degree.

* Over the course of the next however many issues, I've come to the conclusion that a "piped lining" means that there is a piping, possibly even one with no cord running through it, only where the lining and wool meet, not on the seams of the lining itself.
--- 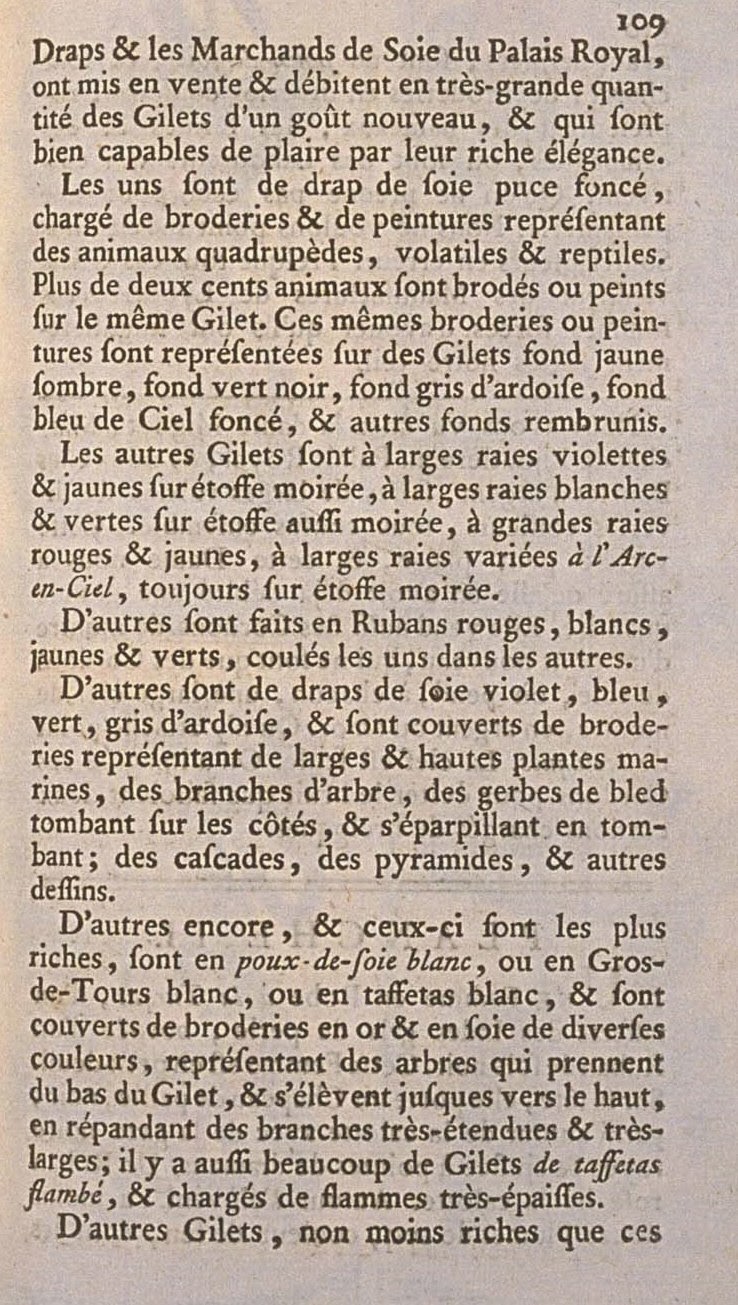 For about eight days, the Wool and Silk Merchants of the Palais Royal, have put on sale and are selling in very-great quantities Gilets of a new taste, and which are very capable of pleasing with their rich elegance.

Some are of dark puce drap de soie,* loaded with embroideries and paintings representing quadrupeds, birds, and reptiles. More than two hundred animals are embroidered or painted on the same Gilet. These same embroideries or paintings are made on Gilets with a somber yellow ground, a very dark green ground, a slate grey ground, a dark Sky blue ground, and other dark grounds.

Others are made in red, white, yellow, and green Ribbons, melting into each other.

Others are of violet, blue, green, slate grey silk cloth, and are covered with embroideries representing wife and tall marine plants, tree branches, sheaves of corn falling on the sides, and scattering while falling; cascades, pyramids, and other designs.

Others still, and these are the most rich, are in white peau de soie, or in white gros de Tours, or in white taffeta, and are covered with embroideries in gold and silk of diverse colors, representing trees which take the bottom of the Gilet, and rise up to the top, spreading their branches very far and very wide; there are also Gilets of flaming taffeta, charged with dense flames. 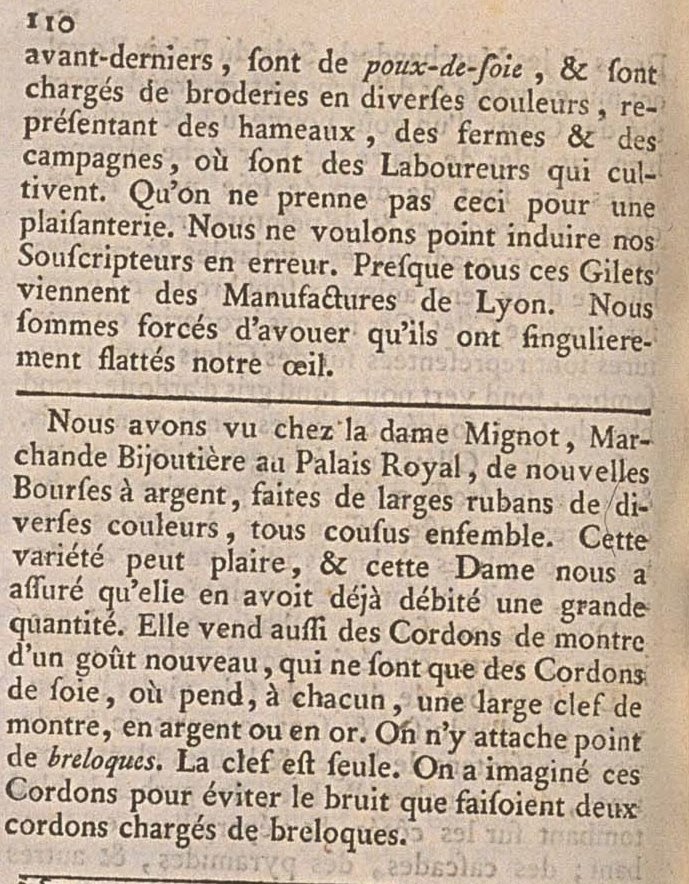 Other Gilets, no less rich than these last, are of peau de soie, and are charged with embroideries in diverse colors, representing hamlets, farms, and countryside, where the Laborers who cultivate are. This should not be taken as a pleasantry. We never want to lead our Subscribers in error. Nearly all our Gilets come from the Industry of Lyon. We are forced to avow that they have singularly flattered our eyes.

* Literally, "cloth of silk"; I have found a definition in a modern dictionary that says it is simply silk fabric, but drap is almost exclusively reserved for wool ("cloth" being wool is very common in contemporary English as well), and an older definition describes various types of drap de soie being twill-woven silk/wool fabrics.

We have seen in the shop of Mme Mignot, Merchant Jeweler at the Palais Royal, new Purses for silver, made of wide ribbons of diverse colors, all sewn together. This variety can please, and this Lady has assured us that she had already sold a great quantity. She also sells watch Cords of a new taste, which are only made of silk Cords, where hangs, on each, a large watch key, in silver or gold. No charms are attached. The key is alone. These Cords were invented to avoid the noise that two cords full of charms make.