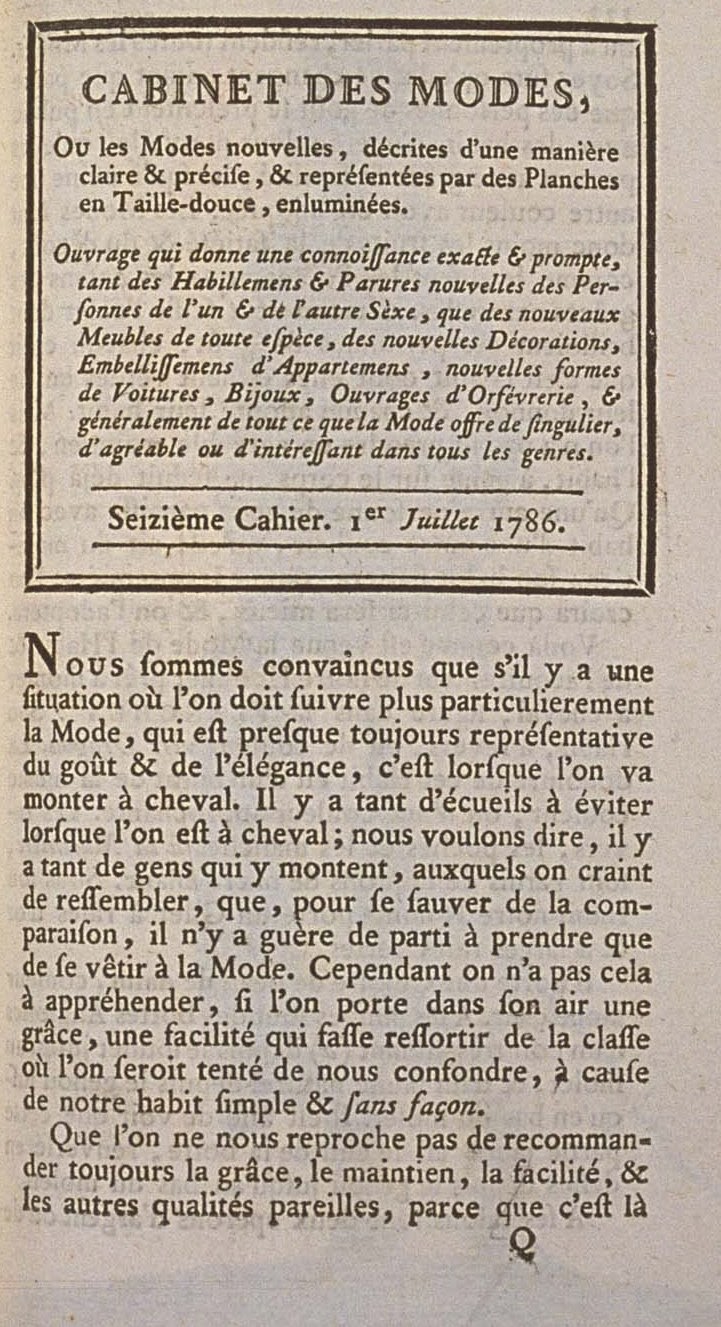 WE are convinced that if there is a situation where one must more particularly follow Fashion, which is nearly always representative of taste and elegance, it is when one goes to ride a horse. There are such obstacles to avoid when one is riding; we mean there are such riders that one does not want to resemble, so that, in order to prevent the comparison, there is hardly any other means to take than dressing stylishly. However, this is not necessary, if one carries in one's air a grace, a facility which emphasizes the class where one would be tempted to confound us, because of our simple and unceremonious habit. 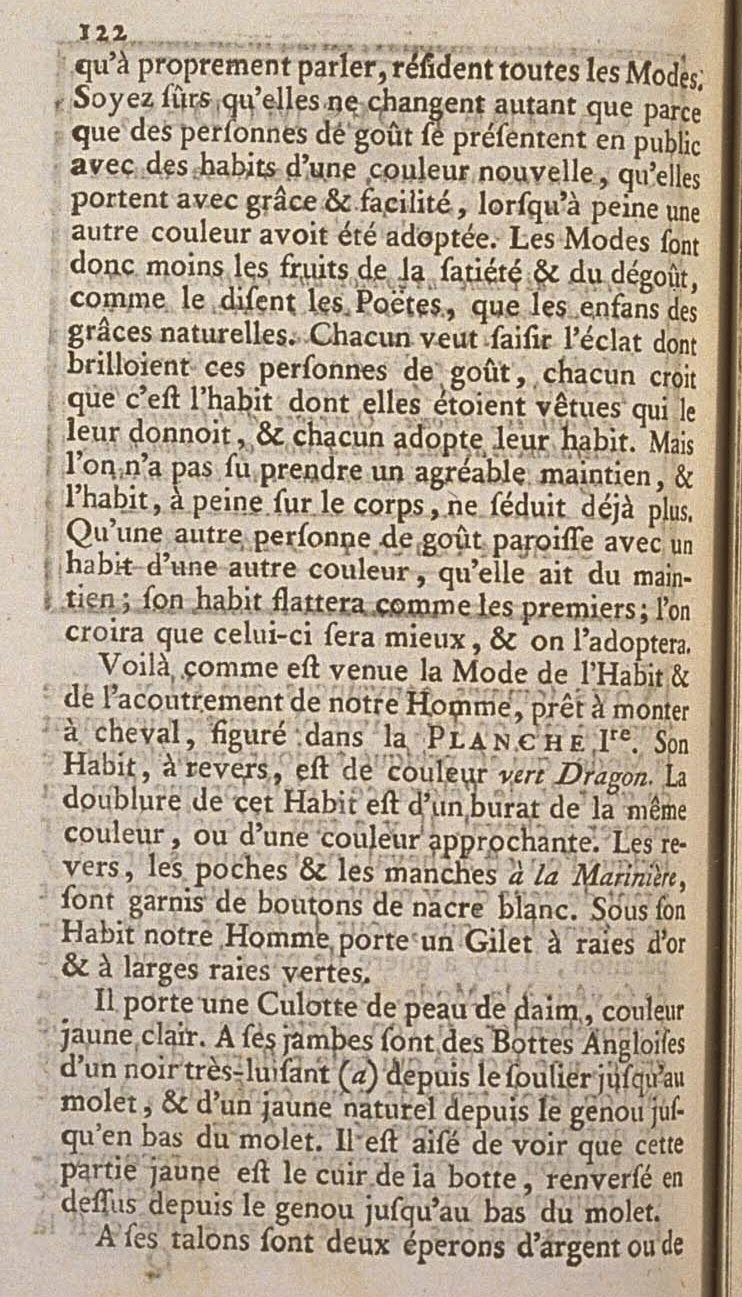 We may not be reproached for always recommending grace, poise, facility, and the other matching qualities, because it is there that, to speak properly, all Fashions reside. Be sure that they do not change as much because people of taste present themselves in public with dress of a new color, than because they dress with grace and facility, when another color has barely been adopted. Fashions are thus less the fruits of satiety and disgust, as the Poets say, than the children of natural graces. Everyone wants to seize the éclat which shines from these people of taste, everyone believes that the dress they wear gave it to them, and everyone adopts their dress. But they did not know how to take an agreeable composure, and the dress, hardly on the body, no longer allured anymore. Another person of taste may be seen with a dress of another color, she may have composure; her dress will flatter like the previous; one will believe that it will be better, and one adopts it.

See, as the Fashion of the Dress and attire of our Man has come, ready for riding, figured in the 1ST PLATE. His Coat, with lapels, is Dragoon green. The lining of this Coat is a buras of the same color, or a color near it. The lapels, the pockets, and the sleeves à la Marinière are trimmed with buttons of white pearl. Under his Coat our Man wears a Gilet with gold stripes and wide green stripes. 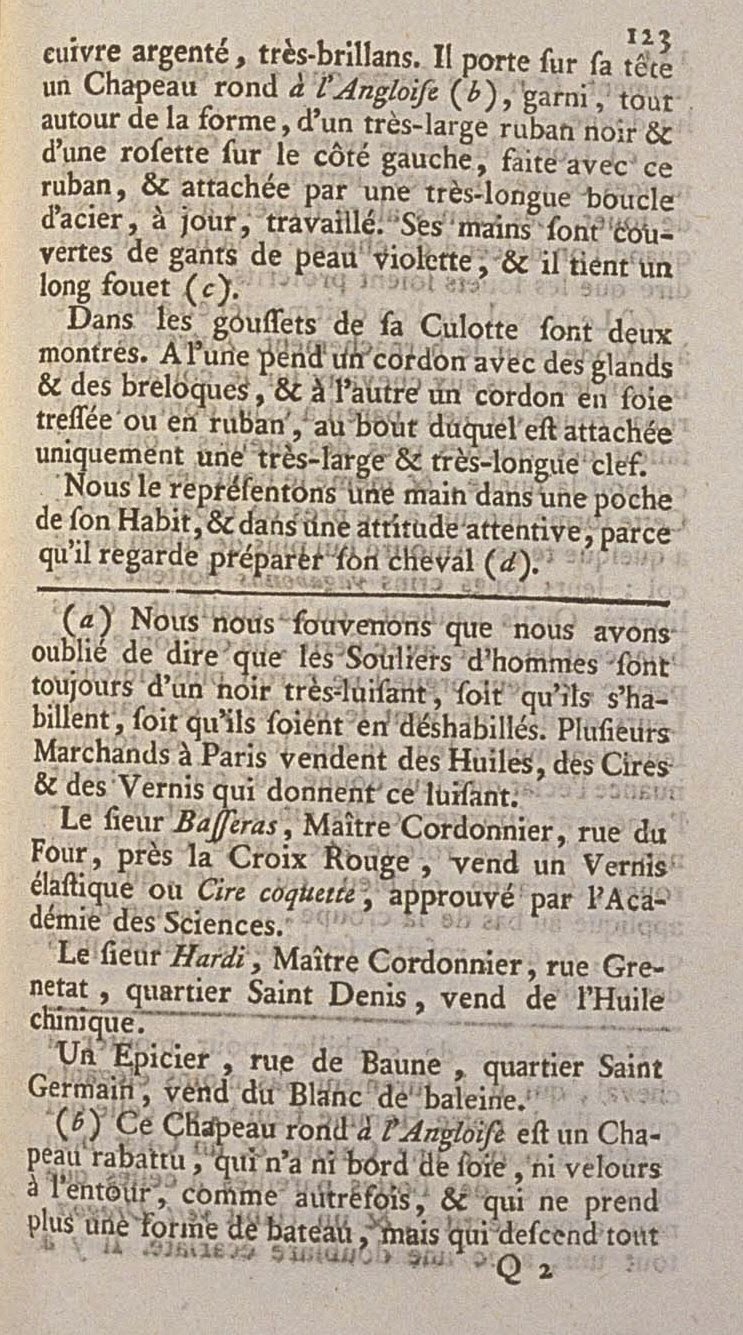 On his heels are two silver or silvered copper spurs, very brilliant. He wears on his head a round Hat à l'Anglaise (b), trimmed, all around the crown, with a very-wide black ribbon and a bow on the left side, made with this ribbon, and attached with a very-long steel buckle, fashionable, worked. His hands are covered with gloves of violet leather, and he holds a long switch (c).

In the gussets of his Breeches are two watches. From one hangs a cord with tassels and trinkets, and the other a cord of braided hair or ribbon, at the end of which is uniquely attached a very-long and very-large key.

We show him with one hand in a pocket of his Coat, and in an attentive attitude, because he is watching to prepare for his horse (d).
---
(a) We remember that we have forgotten to say that men's Shoes are still a very-glossy black, whether in full dress, or whether in undress. Several Merchants in Paris sell Oils, Waxes, and Varnishes which give this gloss. 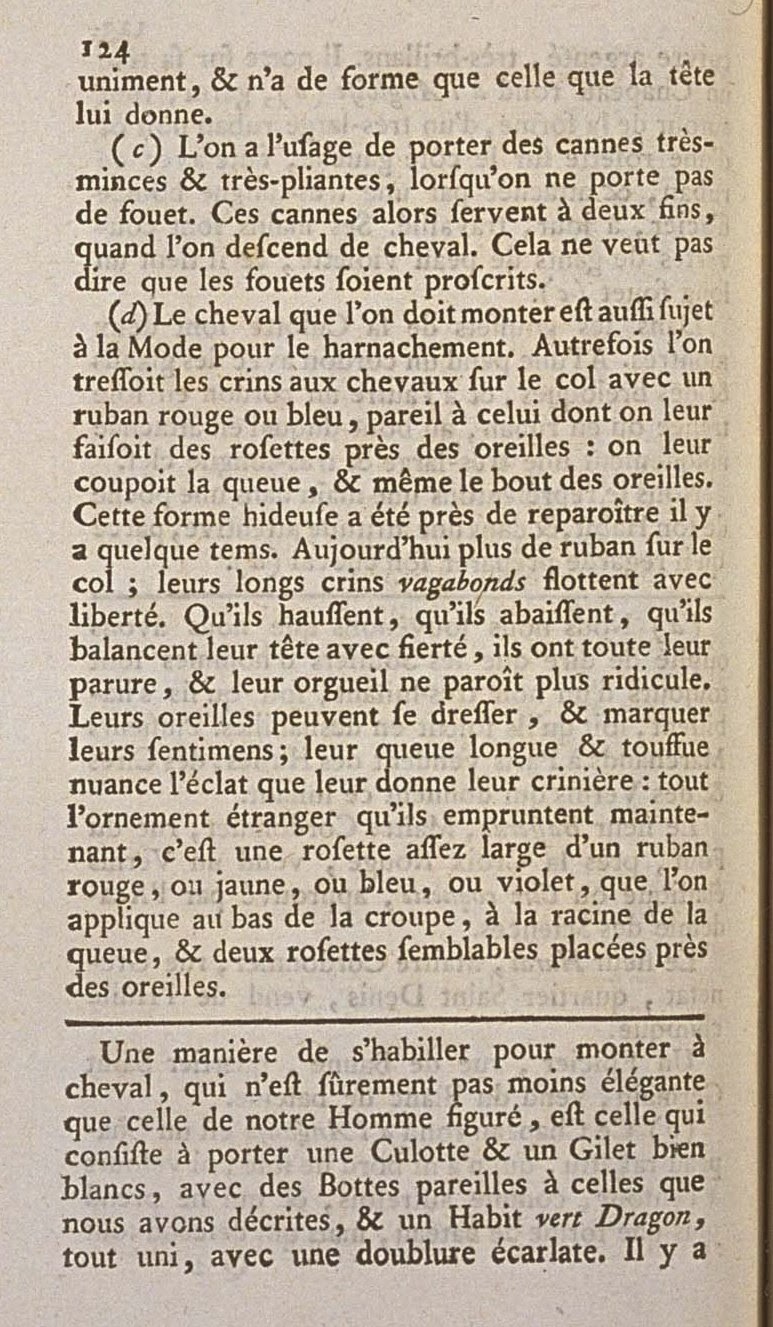 (b) This round Hat à l'Anglaise is a folded Hat, which has neither silk edges nor velvet around it, as at other times, and which no longer takes the shape of a boat, but which descends all smoothly, and only has the shape that the head gives it.

(c) There is a practice of carrying very-thin and very-pliant canes, when one does not carry a switch. These canes thus serve two purposes, when getting off a horse. That does not mean that switches are forbidden.


(d) The horse that must be ridden is also subject to Fashion in its harness. Formerly horses' hair was braided on their necks with a red or blue ribbon, matching that used for bows near their ears: their tails were cut, and even the tips of their ears. This hideous shape was close to reappearing some time ago. Today no more ribbon on their necks; their long vagabond hair hangs with liberty. They may rise, they may lower, they may shake their heads with pride, they have all their parure, and their pride no longer seems ridiculous. Their ears can be trained, and mark their sentiments; their long and bushy tail clouds the brilliance that their mane gives them: all foreign ornament that they borrow now, is a rather large bow of red, or yellow, or blue, or violet ribbon, that is applied to the bottom of the croup, at the root of the tail, and two bows similarly placed near the ears.