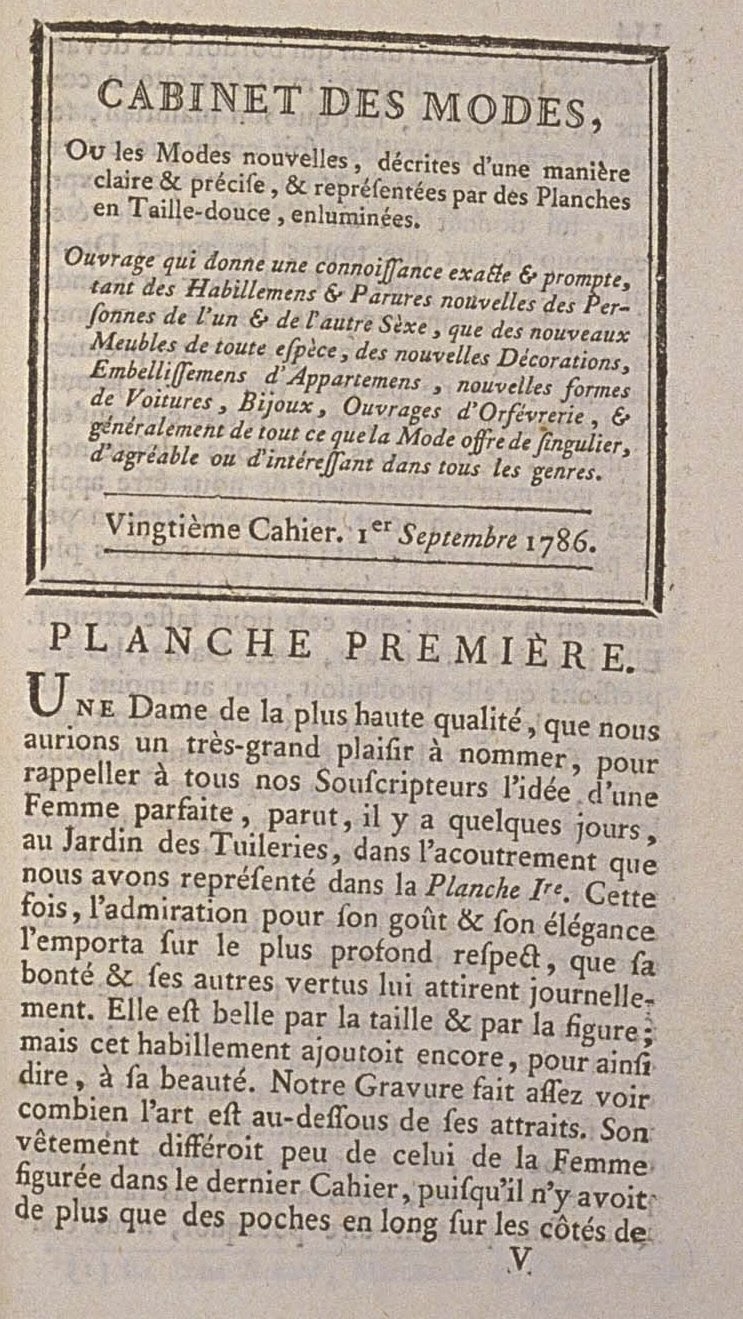 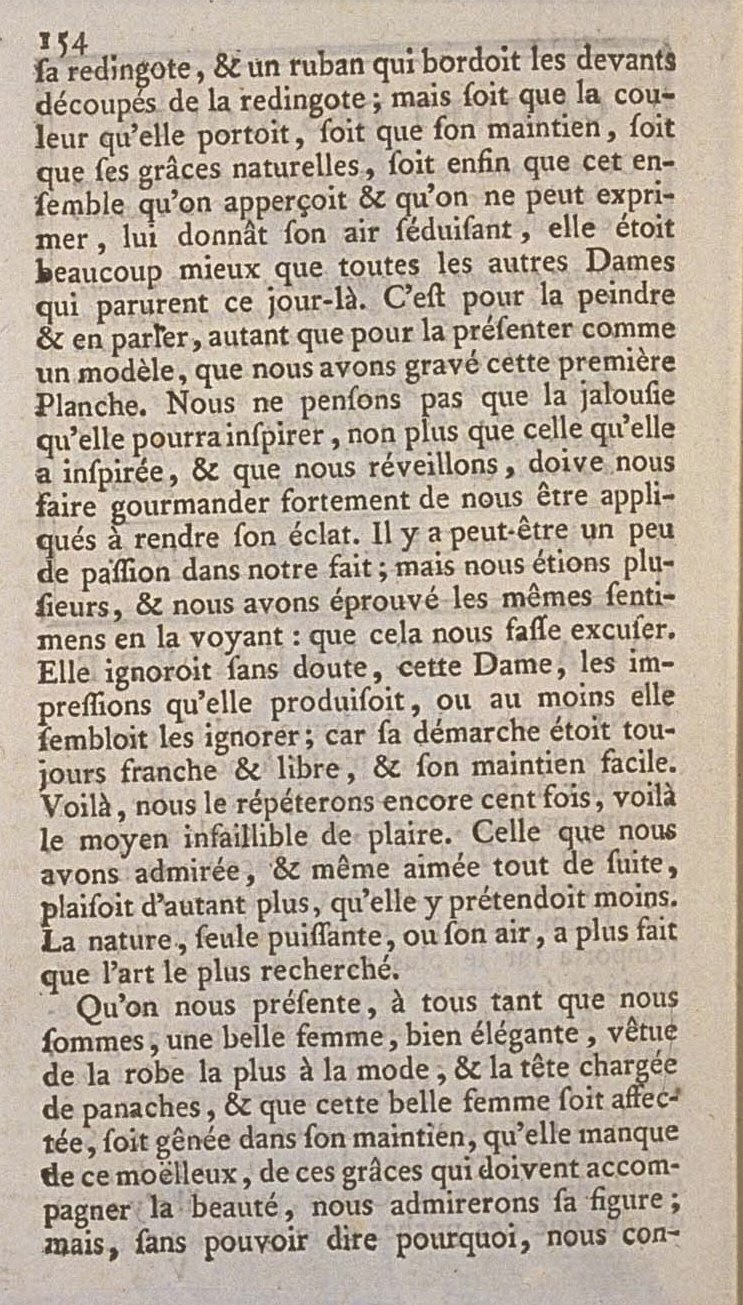 A Lady of the highest quality, that we would have a very-great pleasure in naming, to give all our Subscribers the idea of a perfect woman, was seen, some days ago, at the Garden of the Tuileries, in the outfit that we have represented in the Ist Plate. This time, the admiration for her taste and her elegance overcame the most profound respect, that her goodness and her other virtues draw to her daily. She is beautiful in shape and face; but this dress added still more, so to speak, to her beauty. Our Print shows well enough how much art is the least of her attractions. Her dress differs a little from that of the Woman shown in the last Issue, since there are more pockets along the sides of her redingote, and a ribbon which edges the scalloped fronts of the redingote; but whether it were the color she wore, her poise, her natural graces, or finally that whole that one perceives and cannot express, gave her her seductive air, she was much better than all the other Ladies who dressed that day. It is to describe her and speak of her, as much as to present her as a model, that we have engraved this first Plate. We do not think that the jealousy that she could inspire, not more than what she has inspired, and that we awaken, makes us strongly rebuke ourselves to be applied to render her éclat. There was perhaps a little passion in our fact; but we were several, and we have tested these same sentiments in seeing her: this makes us excuse it. She ignored, without a doubt, this Lady, the impressions that she produced, or at least she seemed to ignore them; for her gait is frank and free, and her composure easy. See, we repeat it again a hundred times, see the infallible method of pleasure. This that we have admired, and even loved immediately, pleased especially, that she claims less there. Nature, sole power, or her air, has done more than the most sought-after art. 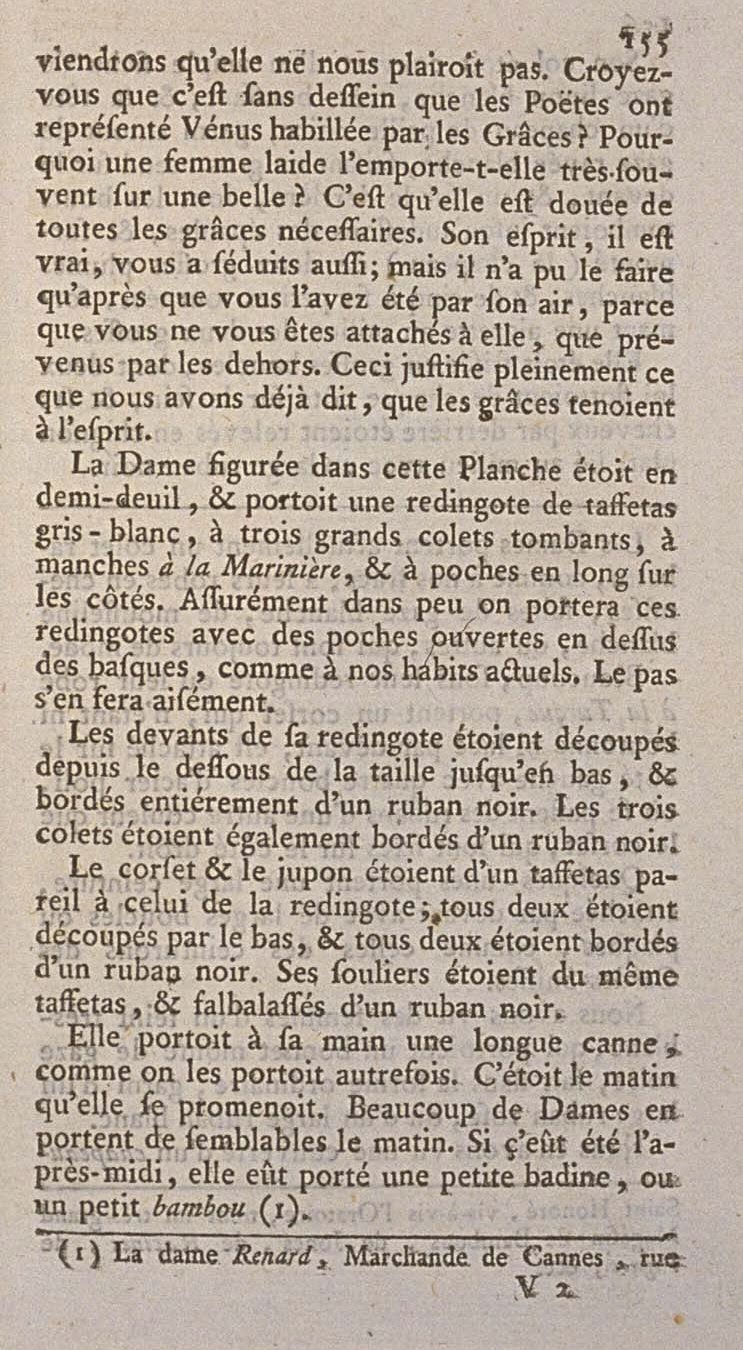 If we are presented, to all such as we are, with a beautiful woman, very elegant, dressed in a most fashionable gown, and her head bearing plumes, and this beautiful woman is affected, uneasy in her bearing, and she lacks this softness, these graces which must come with beauty, we will admire her figure; but, without being able to say why, we will admit that she didn't please us. Do you believe that it was not by design that the Poets represented Venus dressed by the Graces? Why does an ugly woman carry it off more frequently than a beauty? It is because she is gifted with all the necessary graces. Her mind, it is true, seduced you as well; but it could only do it after you had been in her presence, because you were only focused on her appearance. This fully justifies what  we've already said, that graces hold the mind.

The Lady drawn in this Plate was in half-mourning, and wore a redingote of light grey taffeta, with three large falling collars, with sleeve à la Marinière, and with vertical pockets on the sides. Assuredly in a little while these redingotes will be worn with open pockets above the basques, as in our current coats. The change will be easy. 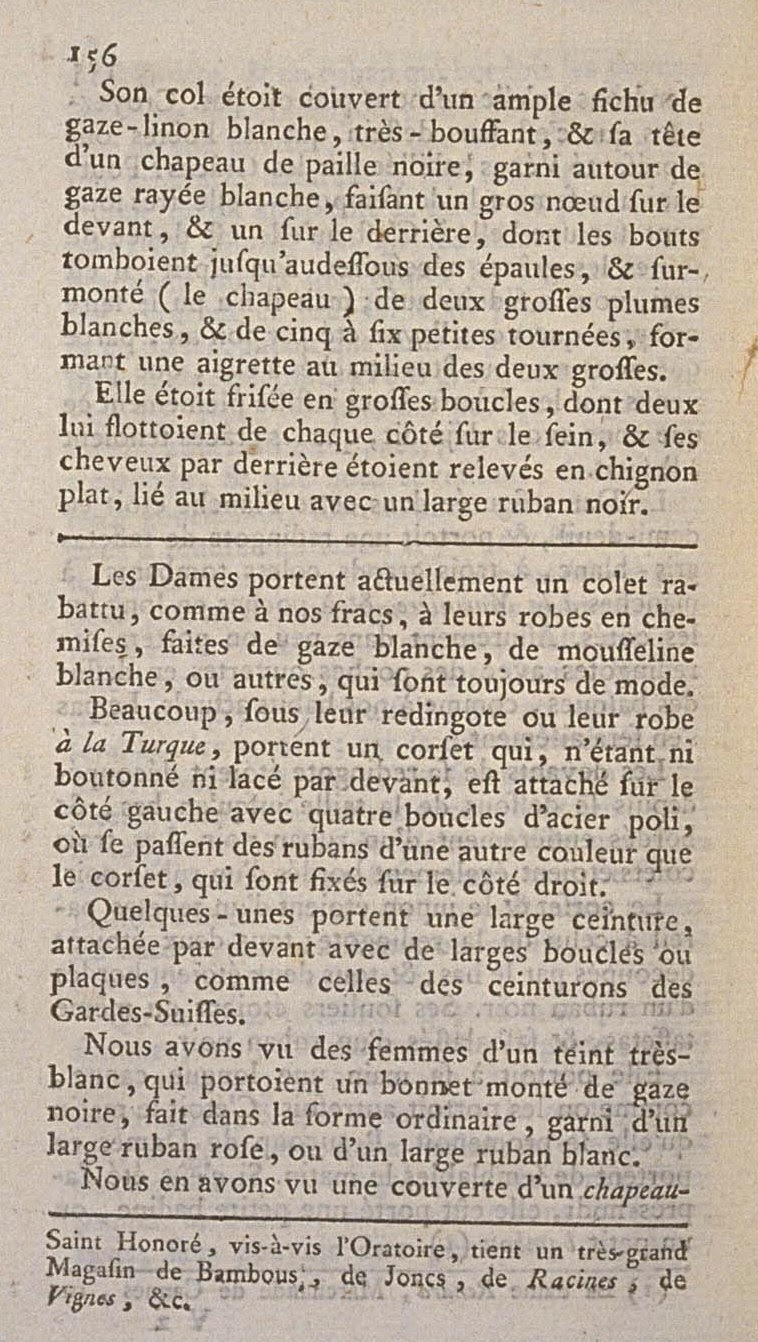 She held in her hand a long cane as were formerly carried. It was in the morning that she was walking. Many Ladies dress similarly in the morning. If it had been the afternoon, she would have carried a little stick, or a little bamboo (1).

Her neck was covered by an ample kerchief of white linen-gauze, very-puffed, and her head with a hat of black straw, trimmed around with white striped gauze, making a large bow on the front, and one on the back, whose ends fell to below the shoulders, and surmounted (the hat) by two large white plumes, and five to six little tournées, forming an aigrette in the middle of the two large plumes.

Her hair was done in large curls, of which two hung on her chest on each side, and her hair in the back was pulled up in a flat chignon, tied in the middle with a wide black ribbon.

Many, under their redingotes or robes à la Turque, wear a corset which, being neither buttoned nor laced in front, is fastened on the left side with four polished steel buckles, which ribbons of another color than the corset, which are fixed on the right side, pass through.

Some wear a wide belt, fastened in front with large buckles or plaques, like those on the belts of the Swiss Guard.

We have seen women of a very-white color, who wore a cap made up of black gauze, made in the ordinary shape, trimmed with a wide pink ribbon, or a wide white ribbon.

We have seen one of them covered with a chapeau-bonnette, made with a yellow gauze, with little black spots, which do not mar it; rather to the contrary.