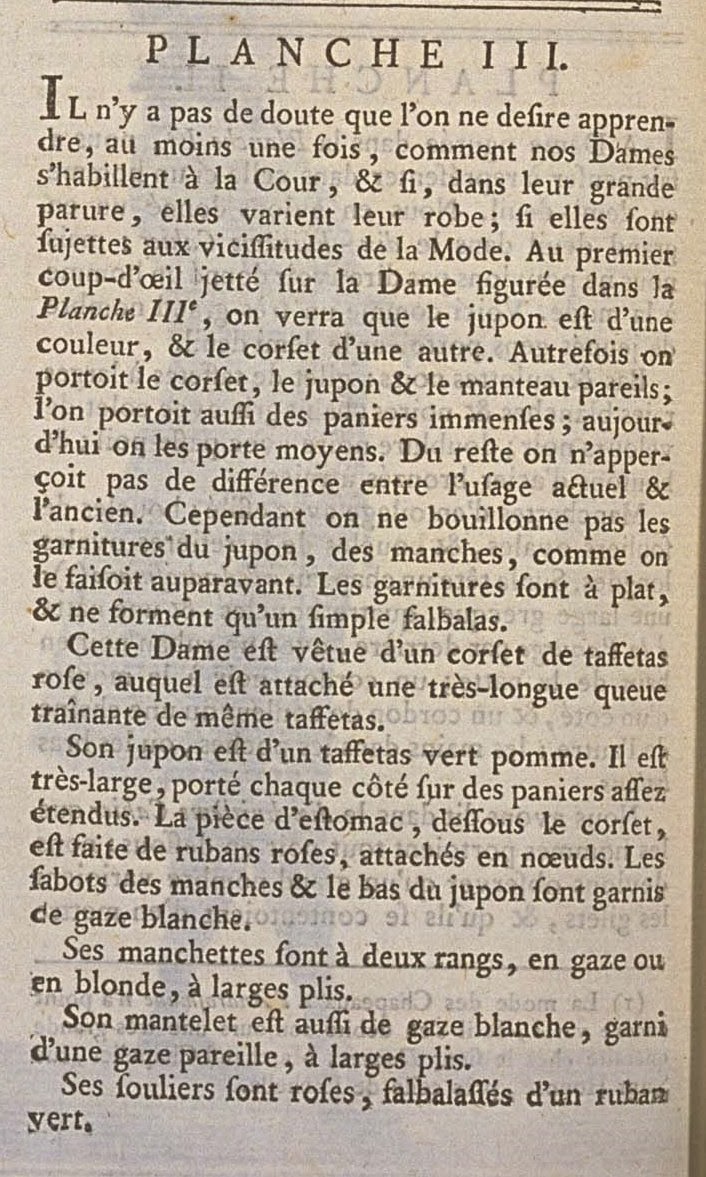 THERE is no doubt that one wants to learn, at least once, how our Ladies dress at Court, and if, in their full parure, they vary their gowns; if they are subjected to the vicissitudes of Fashion. At first glance on the Lady shown in the IIIrd Plate, on will see that the petticoat is of one color, and the bodice is of another. Formerly the bodice, the petticoat, and the mantua were matching; immense hoops were worn as well; today medium ones are worn. Of the rest no difference between the current and former practices is seen. However one does not make the trimming of the petticoat or sleeves bouillonné, as they were made before. The trimmings are flat, and only form a simple flounce.

This Lady is dressed in a bodice of pink taffeta, to which is attached a very-long train of the same taffeta. 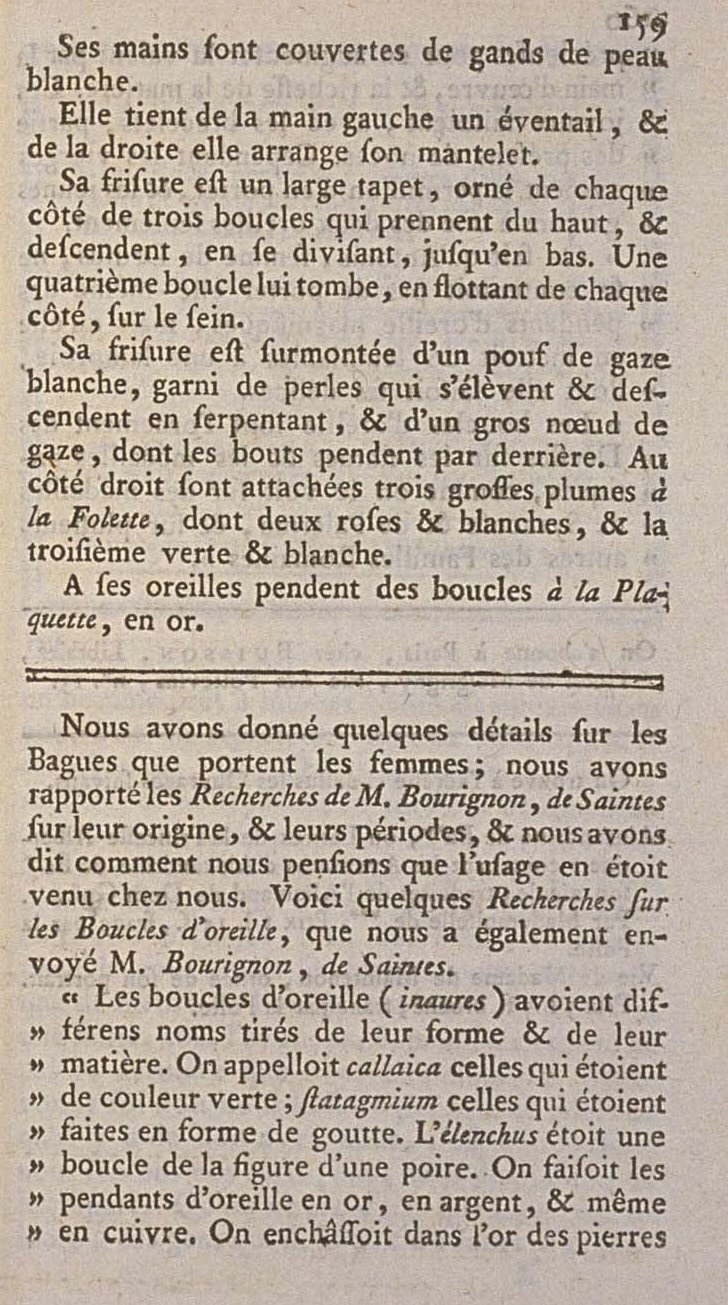 Her petticoat is an apple green taffeta. It is very-wide, worn on each side over rather wide hoops. The stomacher, under the bodice, is made of pink ribbons, tied in bows. The cuffs of the sleeves and the bottom of the petticoat are trimmed with white gauze.

Her manchettes are in two rows, in gauze or blonde lace, with wide pleats.

Her mantelet is also of white gauze, trimmed with a matching gauze, with wide pleats.

Her shoes are pink, flounced with a green ribbon.

Her hands are covered with gloves of white leather.

She holds in her left hand a fan, and with the right she arranges her mantelet.

Her hair is a wide tapet, decorated on each side with three curls which start at the top, and descend, while dividing, to the bottom. A fourth curl falls, in hanging on each side, on her chest. 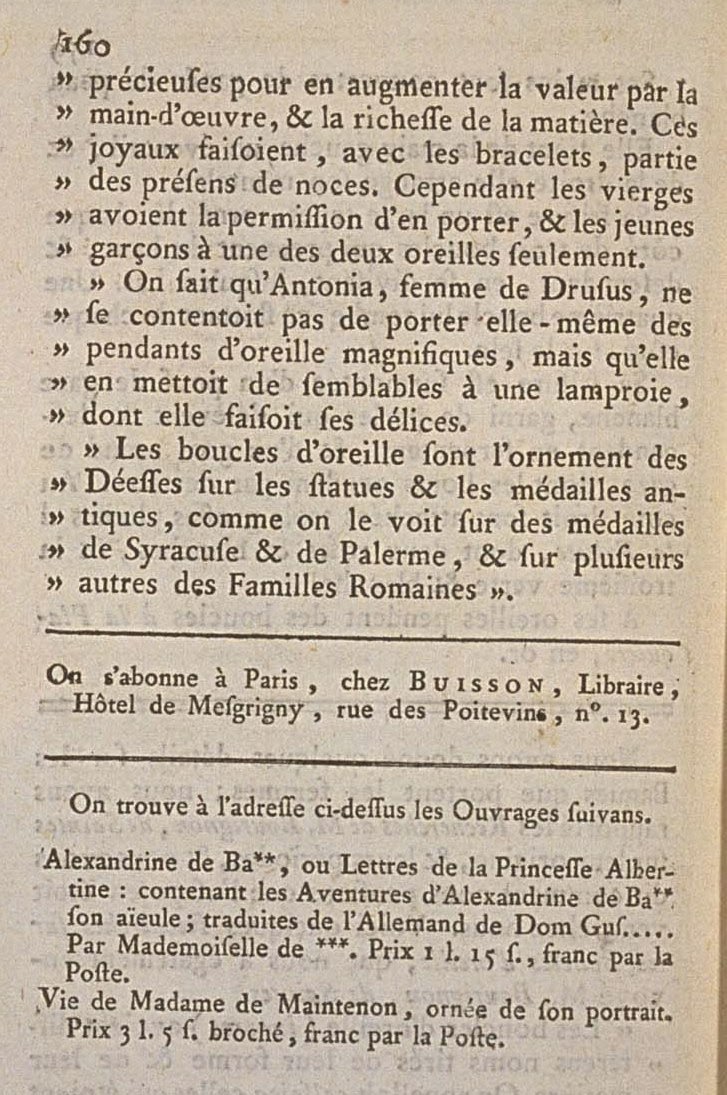 Her hair is surmounted by a pouf of white gauze, trimmed with pearls which rise and fall in a serpentine manner, and with a large gauze bow, whose ends hang behind. On the right side are attached three large plumes à la Folette, of which two are pink and white, and the third green and white.

"Earrings (inaures) had different names taken from their forms and material. Those which were green were called callaica; those which were made in beads, statagmium. The élenchus were a loop with the shape of a pear. Earrings were made in gold, in silver, and even in copper. Precious stones were encased in gold to increase their value in labor, and in the richness of the material. These jewels, with bracelets, made up part of the wedding presents. However virgins had permission to wear them, and the young men in only one of their ears.

"It is known that Antonia, wife of Drusus, was not contented with herself wearing magnificent earrings, but put similar ones on a lamprey, with which she made her delights.

"Earrings are the ornament of Goddesses on statues and antique medals, as seen on the medals of Syracuse and Palermo, and on several other Roman Families."
---
Subscribe in Paris, at M. BUISSON's, Bookstore, at the Hôtel de Mesgrigoy, rue des Poitevins, no. 13.
---
At the address are found below these following Works.

Alexandrine of Ba**, or Letters of the Princess Albertine: containing the Adventures of Alexandrine of Ba** her ancestor; translated from the German of Don Gus..... By Mlle de ***. price 1 livre 15 sous, franc for the Postage.