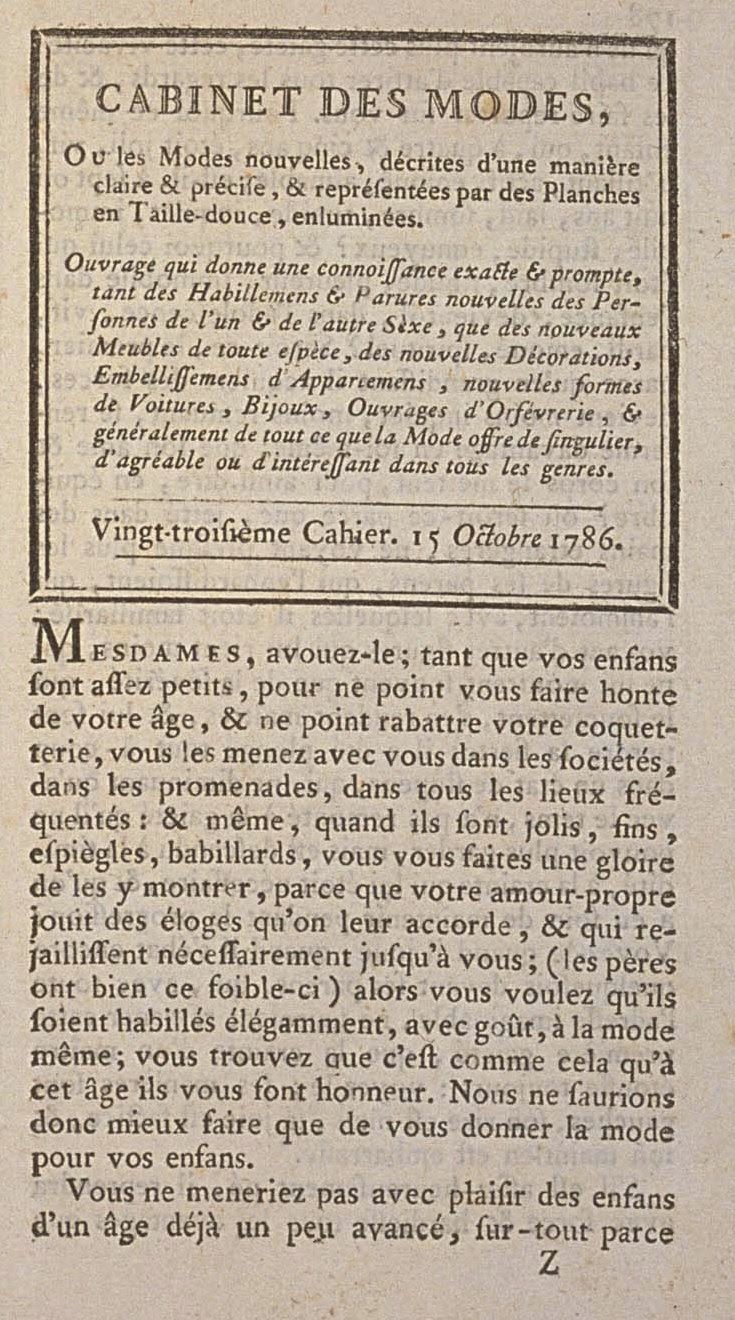 MESDAMES, admit it; while your children are rather little, in order not to make you honest about your age, and not to shut down your coquetry, you take them with you in society, in the promenades, in all the frequented places: and even, when they are pretty, fine, playful, babbling, you glory in showing them off, because your self-esteem loves the praise accorded to them, which necessarily comes back to you; (the fathers truly have this weakness) thus you want them to be elegantly dressed, with taste, in the same fashion; you find that at this age they bring you honor. We therefore only would know best what to do to give you fashion for your children. 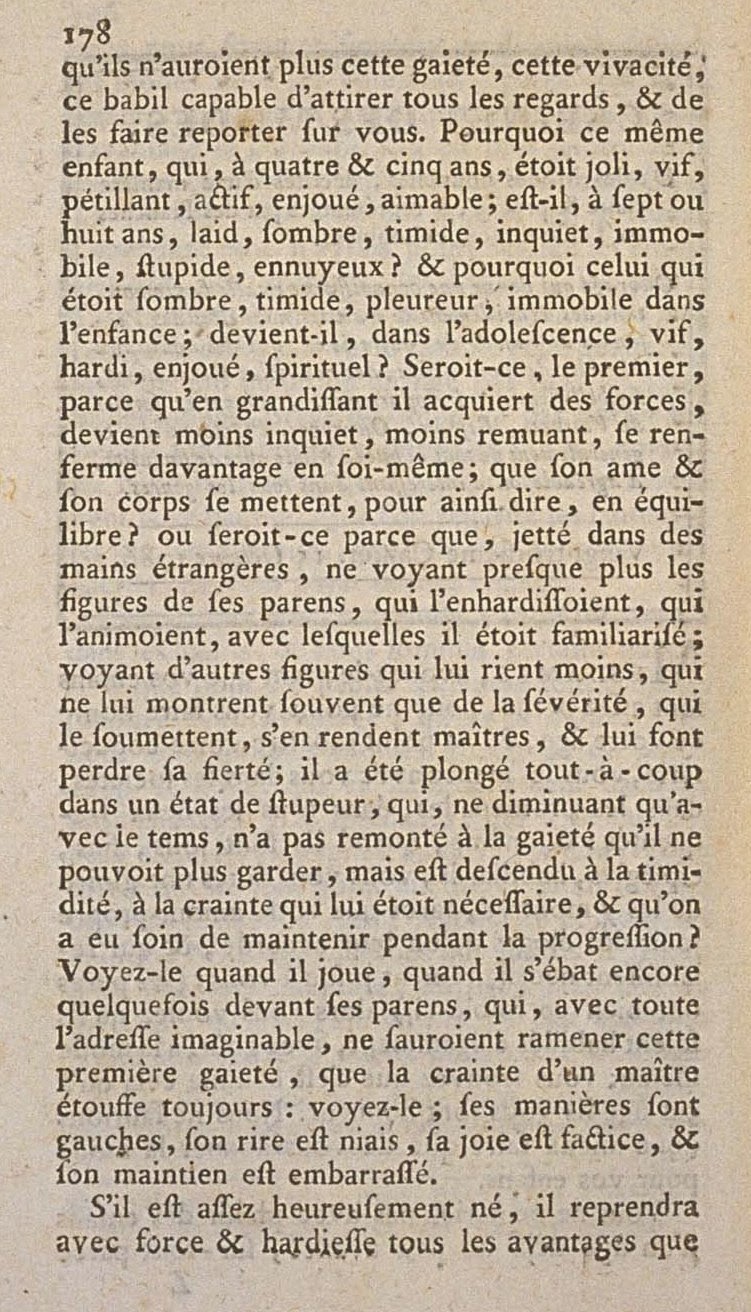 You would not lead with pleasure children of an age already a little advanced, mainly because they would not longer have this gaiety, this vivacity, this babble capable of attracting all eyes, and of bringing them back to you. Why is this same child, who at four and five years was pretty, bright, bubbly, active, playful, friendly, at seven or eight years ugly, somber, timid, worried, motionless, stupid, boring? and why does this one who was somber, timid, weepy, immobile in childhood become, in adolescence, bright, bold, playful, witty? Would it be, the first, because in growing he acquires these forces, becomes less worried, less restless, more self-contained; that his soul and his body are put, so to speak, in equilibrium? or would it be because, thrown into the hands of strangers, hardly seeing the faces of his parents who emboldened him, who animated him, with which he was familiar; seeing other faces who laugh less at him, who often only show him severity, who submit to him, make themselves masters, and are lost to their pride; he is plunged all at once into a state of stupor, which, only diminishing with time, has not recovered the gaiety that he could no longer guard, but descended into timidity, to the fear which was necessary to him, and was care taken to maintain him during this progression? See when he plays, when he romps again sometimes in front of his parents, who, with all imaginable address, would not know how to bring back this first gaiety, but the fear of a master still stifles him: see him; his manners are gauche, his laugh is inane, his joy is artificial, and his composure is embarrassed. 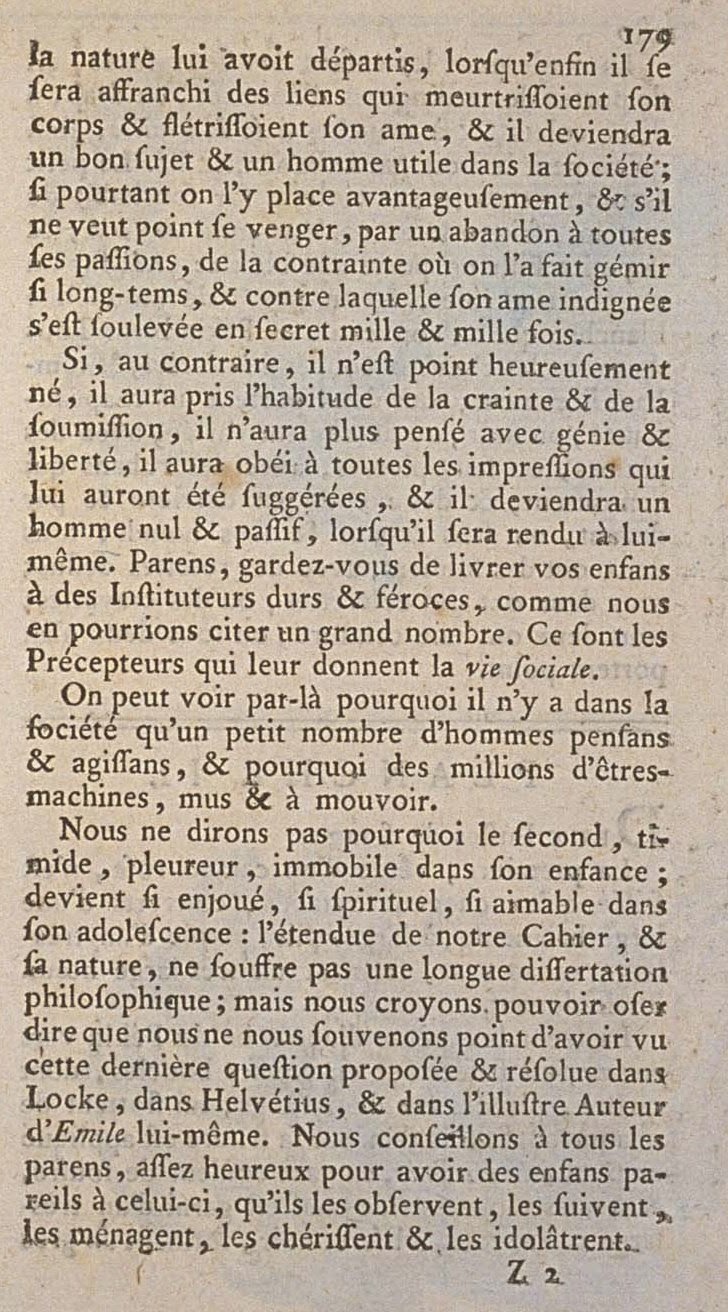 If he is fortunately born, he will take back with force and boldness all the advantages that nature had divested him of, when at last he has overcome the bonds which bruised his body and seared his soul, and he will become a good subject and a useful man in society; yet if he is placed advantageously, and if he does not want to revenge himself, by abandoning himself to all his passions, on the constraint under which he was made to groan for so long, and against which his indignant soul revolted against in secret a thousand times.

If, on the contrary, he is not fortunately born, he will have made a habit of fear and submission, he would no longer have thought with genius and liberty, he will have obeyed all the impressions which will have been suggested to him, and he will become a null and passive man, when he is rendered to himself. Parents, make sure to free your children from the hard and fierce schoolmasters, such as we would be able to cite a large number of. They are the Preceptors who give them the social life. 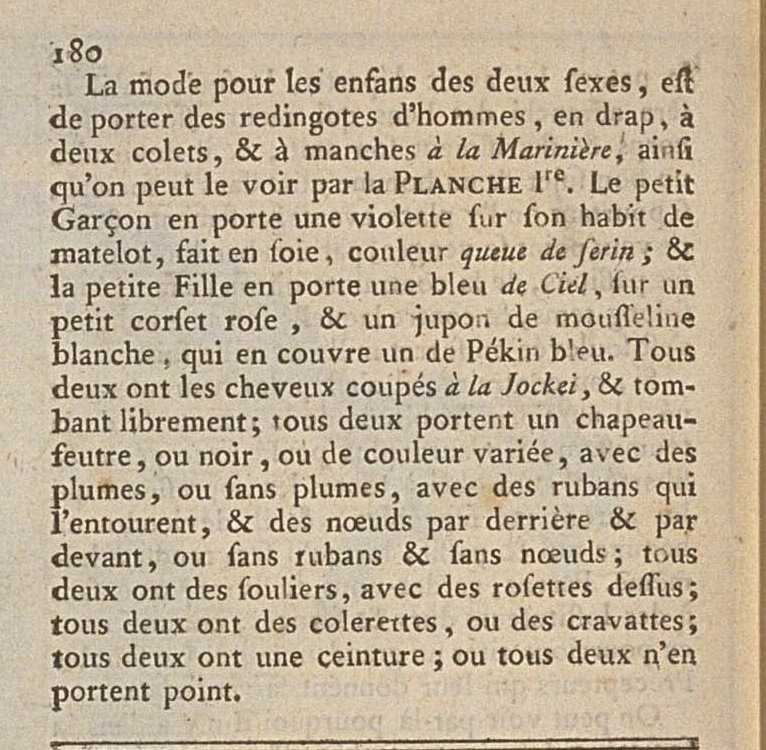 It can be seen by that why there is no more than a small number of thinking and acting men in society, and why there are millions of man-machines, powered and moving.

We will not give why the second, timid, weepy, unmoving in his childhood, becomes so playful, so witty, so friendly in his adolescence: the extent of our Issue and its nature does not suffer a long philosophical dissertation; but we believe it possible to dare to say that we do not remember having seen this latter question proposed and resolved in Locke, in Helvetius, and in the illustrious author of Emile himself.* We counsel all parents, happy enough to children like these, to observe them, follow them, humor them, cherish them, and worship them.

The fashion for children of both sexes is to wear men's redingotes, in wool, with two collars, and with sleeves à la Marinière, as can be seen in the Ist PLATE. The little Boy wears a violet one over the coat of his matelot, made of silk, canary's tail color; and the little Girl wears one of Sky blue, over a little pink corset, and a white muslin petticoat, which covers one of blue Pekin. Both have hair cut à la Jockei, which falls freely; both wear a felt hat, either black or a varied color, with plumes, or without plumes, with ribbons wrapping it, and bows in the back and front, or without ribbons and bows; both have shoes with bows on top; both have colerettes, or cravats; both have a belt; or both do not wear them.