October 08, 2014
Redfern is relatively well known as an early couture and tailoring house, but the specific people involved, or their talents beyond women's suits and riding attire, are often overlooked when discussing the progress of fashion - which is usually distilled down into a few vibrant personalities and their innovations. Redfern's early years overlapped with Charles Frederick Worth, who steals the spotlight from all contemporaries.

John Redfern (1820-1895) opened a draper's establishment in the city of Cowes on the Isle of Wight in the mid-1850s, where he was joined by his sons. In the early 1870s, his shop expanded to sell silk as well as wool, and also clothes for mourning; a little later it seems to have added yachting dress, as Cowes was historically a center for boating and regattas. The early obscurity of the business means that many sources give slightly contradictory information, but it's connected to Lillie Langtry's "Jersey Costume" worn in 1879, with a yachting outfit consisting of a wool pullover worn over a heavy skirt.

Not long after, possibly because of this celebrity patronage, Redfern was able to open a salons in London and send an employee, Charles Poynter (later taking the name Charles Poynter Redfern), to open one in Paris. (Twentieth century sources conflict over which was opened first - both are given in various books as opening in 1881. Perhaps they opened in the same year.) From this point, Redfern & Sons began to appear in fashion magazines, usually in mentions of tailor-made outfits and in conjunction with titled clients. By 1882, they were Tailors by Appointment to the Princess of Wales, and by 1885, to Queen Victoria, Maria Feodorovna, Queen Emma of the Netherlands, and numerous others as well, and they also had a third salon in New York City.

Fitted street costumes were clearly the firm's forte during the 1880s, often of wool serge trimmed with braid, but they also sold mantles and wraps, and continued to furnish mourning on short notice. On the whole, the tailored look was popular: ordinary dress had been well-fitted to the upper body for some time, incorporating elements of menswear such as prominent center front buttons, basqued bodices (resembling coats worn over skirts), and lapels. In working as a tailor, the Redferns' advantage was that their talents were perfectly suited to the prevailing taste. I am not sure how much effect the house had on fashion, except that it was noted as resisting attempts to bring back the train in the early 1890s; however, this may have more to do with Redfern concurring with the prevailing taste again.
Intricate braid patterns and embroidered panels were as much a part of the Redferns' style as good fitting, and seem to have continued on in the house when fit began to allow for more looseness. Starting in the early the 1890s, the house was associated more frequently than it had been with more fanciful and dressy gowns - even wedding dresses! - while also still making the original braided wool jackets. It is probably not an insignificant fact that John Redfern was by this time rather old, and perhaps even ill (as he died in 1895). As the business came under Charles Poynter's control, possibly in 1892, when it was renamed Redfern Ltd., the focus shifted. However, changing tastes in the public were also a factor: the strict tailor-made was becoming more dressy across the board, and gathering and draping in the body were taking precedence over perfectly fitted shells.
By the 20th century, Redfern was still acknowledged as the maker of outerwear, but the house was producing some extremely frilly and untailored gowns far removed from the original design ethos. (NB: Around this time the Redfern Corset, from the Warner Bros. Co., began to be advertised. So far I have found no connection to the couture house. However, Redfern may have made custom corsets for their clientele.)
While Worth was no longer represented quite as frequently in the fashion magazines during the first decade of the century, Redfern was at center stage with Beer, Paquin, and Drécoll. Fashionable actress Mary Garden attributed the draped Greek styles she wore onstage in 1909 to Redfern, which is notable as the house is rarely if ever mentioned in conjunction with the transition into the high-waisted styles of the early 1910s.

The same state of affairs persisted in the 1910s, with Redfern included along the greatest couturiers of the age in the Gazette du Bon Ton, and continuing to be showcased as a top fashion house in magazines. Like the other Paris houses, Redfern produced perfumes as well, beginning with Sourire de Paris in 1915; Chypre de Paris was introduced in 1920, and more 1929-1930 and then in 1938. 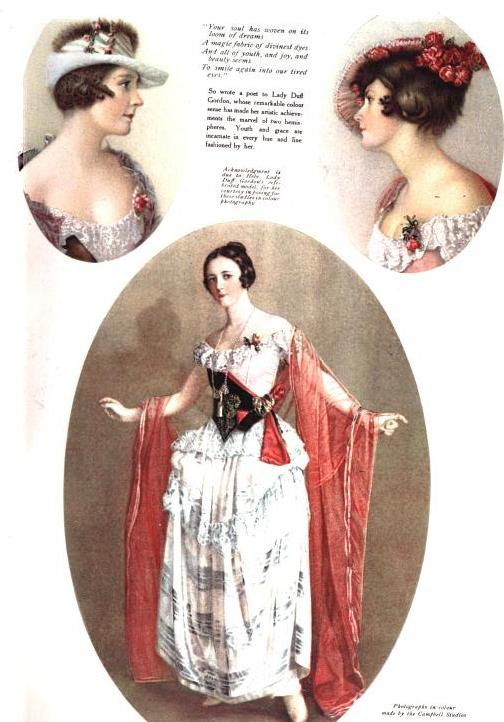 Given the limits of the public domain, it becomes harder to track the company after the early 1920s. One source reports that the house closed 1932-1936, most likely in response to the economic depression, and then in 1940 - like many others, due to the war. And, like many others, it did not reopen afterward.

I leave you with an adorable short story from the early 1900s, "Miss Brown's Baggage", in which a Redfern dress plays a part.