October 12, 2016
I can't believe I've been working on this exhibition since the spring. Well, technically, I spent quite a few months in between researching a walking tour of Main Street - originally my brother agreed to make an ambitious app for it, which was then scaled back into a page on our website, and then recently I found that The Clio Foundation is developing something to allow exactly the kind of tours I want to create, so that isn't available yet. 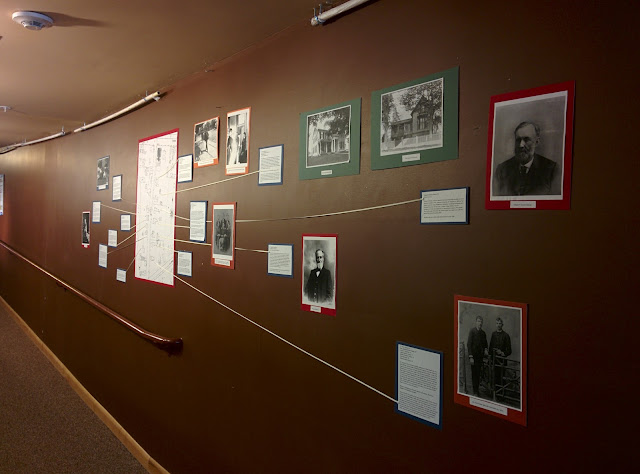 The exhibition itself went up very smoothly. As you can see, it's not large - just one short stretch of wall next to and running up the side of our narrow ramp. To the right is the intro text:


Imagine yourself back in Canton in the year 1900. Walking down the north side of Main Street from the Silas Wright House (at this time being used as a parsonage for the newly-rebuilt Universalist Church), you pass most of the same buildings that you know today with different occupants – the Remington Corner Clothing Store, Conkey’s Drug Store, Cleland Austin, Dezell’s – and see the American House and Jack & Kirkland’s bakery on the south side. Once you pass the Neo-Gothic splendor of the town hall, turn left onto calm, residential Miner Street.

The design is pretty simple. In the center (... the thematic center; it's actually off to the left) is a copy of the 1905 Sanborn Fire Map showing Miner Street 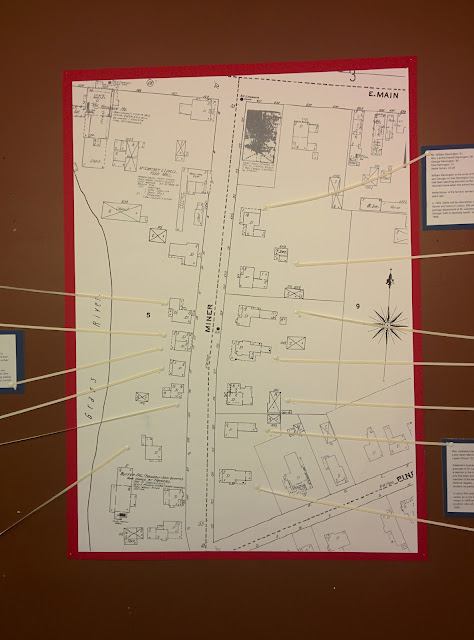 A narrow cotton tape connects each relevant house to its label, often accompanied by a photo of the house or one of its residents. As you can see from the photo at the top, most of the photos are on the right/east side of the street - the people who lived there were more affluent than those on the west side next to the river and had more opportunities for having their pictures taken, and/or had more photogenic houses. The two pictures on the left are of Nelson Brown, who worked in the fairly well-documented J. H. Rushton boat factory, and J. Stanley Ellsworth, a local retailer whose family was the one exception to the rule about affluence and street side.

When I first got started with this project, I hoped that it would be something easily replicable for other museums like us (focused on local history, no money for fancy exhibition installations, etc.). Unfortunately, I'm not sure whether it is. A number of things came together to make this work for me: