June 05, 2017
So, after getting the bodice mostly ready to go, I turned to the skirt. The pieces were easy enough to cut out: if you look at the pattern (Regency Women's Dress, p.98), you can see that there are mostly rectangles, plus one gore on each side.

It was fairly simple - I used the same proportional method that I did on the bodice. If the front panel on the original was (for example) 150% of the waist before pleating, I made mine 150% of my waist; if the pleated width was 50% of the waist, I pleated it down to 50%. For the gore, I increased the top this way and then ran the slanted seam down at the same angle as in the original. The back panels ended up at about 26", so I just used the full width of the fabric (60") and cut a slit in it for the opening, which I turned and sewed with underhand hem stitch (more frequently known by its French name, point à rabattre sous le main), whipping over the unturnable bit at the bottom. 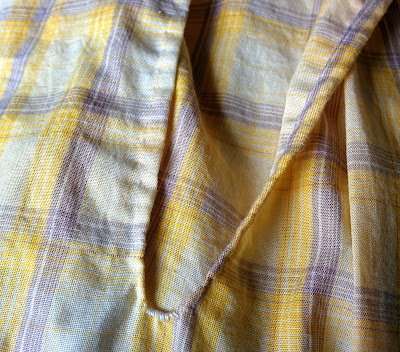 All of the seams were sewn with a small running stitch. This is a pretty safe option for most skirts, and is actually an accurate choice even at the beginning of the sewing machine era.

After sewing up the seams, I took up the tuck. Historically, we often see the lower edge of a skirt treated in a very deliberate way - completely straight across on the grain, for instance, the way the front and back of this one is - because instead of making the whole thing and then hemming the bottom to fit the body, the adjustments would be done at the top. In these cases, it can be simpler to do all the skirt-sewing before the bodice is put on, so that's what I did.

It's pretty simple - 3/4" folded, 4" above the bottom of the skirt. I also did that in a running stitch, about as small as I could make the stitches. (On top, anyway.) This tuck isn't visible in the museum's photograph, because it's covered by a flat ruffle/flounce - more on that later.

If you have the book, you can see that the bottom of the gore is not level - it curves up so that the skirt is "round" or "walking length", rather than trained. This makes the tuck, which has to curve along with it, a little tricky - but if you're sewing by hand, it's fairly easy to massage the underside of the curve into place in that one little spot on each side.

After the tuck, I did the piping and facing. As you can see from the picture below, I used the same Sugar'n'Cream crochet cotton for the hem piping; really, I should have used something much thicker, with more body, but I was in a rush and so did not take the time to order a heavier cord. This step was actually more like modern sewing than you might expect: I put the wrong side of the facing to the wrong side of the plaid, with the piping in between, and sewed it (with a running stitch, if I recall correctly). Then I turned everything right side out, turned in the top of the facing, and running-stitched it down from the right side. This stitching is hidden under the tuck, and the piping looks like it's just floating there! 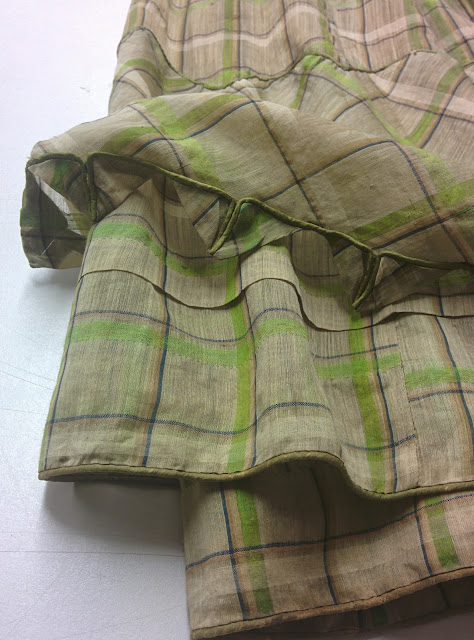 I did not make the flounce yet. This fabric was purchased as an end-of-bolt lot, 5 or 5.5 yards, and I knew that there would never be enough left to cut on the bias; I think now that there would be enough to cut it across the breadth, with piecing. Unfortunately, there wasn't enough time to do it before the parade (that piping will take quite a while), so that will have to come later ... and, again unfortunately, be less striking than the original. I'm not sure when I'll have the time to do that, though.

The waistband went on the bodice next. I had to do a similar proportion comparison to figure out exactly how tight to pull the gathering stitches on the bottom of the bodice, but you could probably eyeball it and end up in roughly the same place. Ah well!

It's helpful to iron down the seam allowances on both the top and bottom of the waistband and its lining, since you sandwich the bodice between the layers and topstitch it down. I used a small spaced backstitch.

The top of the skirt was pleated, folded down, and then whipped into place. I didn't leave very much of a turn-down because I was confident that the length was correct, but if you're not, you should really aim for more and then cut it off.

The original raw edges were overcast, which is on my list of things to do later, when I have some more time. (Another project needs to be started immediately.) 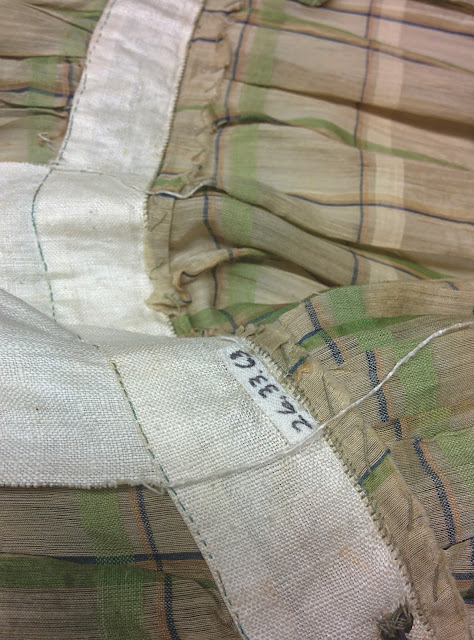 Okay, that's pretty much it for the skirt! Next time, the sleeves and fastenings, and the first wearing.


Before I end this post, I'd like to talk to you a bit about Patreon, a website that a lot of content creators use - artists, cartoonists, podcasters, writers, and so on. Basically, it allows fans to chip in a little money per month, and get a little more content at the same time.

In the case of my Patreon, you can vote in and suggest choices for polls determining what I research! When I hit certain goals for monthly income, I can and will do some more projects that benefit everyone: for instance, when I reach $30, I'm going to start a podcast (which I am SO excited about), and at higher levels I'll be publishing some of my translation work.

So please take a look at my page! I love sharing fashion history with the world, and I'd love to be able to share more of it.
1820s 19th century photos