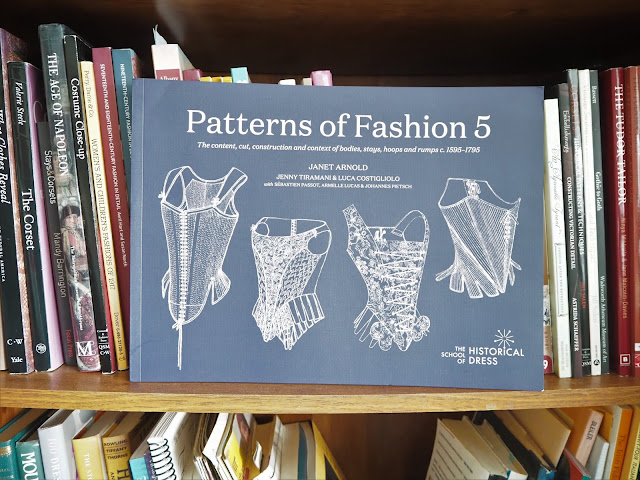 A little background, if you're not familiar with it: Janet Arnold wrote the original two Patterns of Fashion books (1660-1860 and 1860-1940) in the 1960s, and followed them up in 1985 with a third based on 1560-1620. A fourth was published posthumously on shirts, smocks, ruffs, etc. in roughly the same time period (she worked on Elizabethan and Shakespearian dress quite a bit), based on her original material, edited and added to by Jenny Tiramani (longtime professional costume designer with a passion for accuracy) and Santina Levey (a lace/embroidery specialist).

Patterns of Fashion 5 is likewise based on her patterns and notes, but has been very extensively added to by Jenny Tiramani and Luca Costigliolo (also a costume designer; the two have worked together for a long time). This is a heavy paperback! In a short preface, Tiramani explains that they added the pattern of a recently-discovered farthingale, but that otherwise these are the patterns that had been set out by Janet Arnold for the book, mostly with her classic, detailed illustrations.

(There will also be a book on men's clothing in the seventeenth century, an one on European women's in the eighteenth. She left a lot of patterns! This is very understandable. When you're taking one it feels like forever, but in comparison with all other aspects of publishing it's quite fast.)

If you've seen the two Seventeenth-Century Women's Dress Patterns books, then you have a pretty good idea of what kinds of things Tiramani and Costigliolo did to achieve what Janet Arnold had not been able to with the limitations of the late twentieth century. There are color photos of each garment, full-length and detail shots. There are x-rays that let you see the layers and thicknesses of boning used in the original. There is color-coding on the patterns themselves to clarify things. It's really great! These additions are so helpful to understanding the garments. 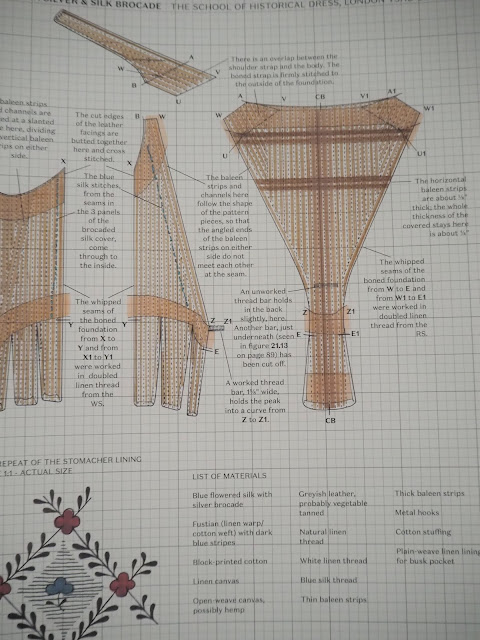 You know I always like to break down the contents to whet people's appetites, so:

- An introduction with an extensive rundown of the timeline, and photos of stays and hoops with added labels to act as a glossary, detailed explanations of the materials used in-period (with wonderful photography), and quotations from primary sources about historical methods of construction. I'm selling this short, there's quite a lot there - basically, even if you don't plan to use the patterns and just want a reference on the stay and hoop industries, the book is worth the price because it's all here.

- The Dorothea stays and Effigy stays
- Two semi-outerwear waistcoat-like stays from early 17thc Germany
- Two mid-17thc stays with stomachers
- Three sets of sleeved stays/informal gown bodices from the first half of the 17thc
- A 1660s court gown with boned bodice and petticoat, and two more without petticoat
- Set of stays with stomacher that allowed for maternity wear
- The famous pink silk sleeved stays at the V&A from the second half of the century
- Set of stays ca. 1700 that would have been worn under an open mantua
- A boned and embroidered stomacher of the 1720s
- Four sets of stays from 1740 to 1760 (two with stomachers)
- One set of Continental(?) stays, 1760-85
- Sophia Magdalena of Denmark's wedding court bodice, petticoat, and train from 1766
- A stay busk from each century
- Strapless stays from the 1760s
- Three pairs of strapped, half-boned stays from the 1770s-1780s
- Fully-boned, strapless stays from ca. 1789 (I don't know, though, they seem earlier to me)
- A set of fully-boned, strapped Spanish stays that are probably underbust

- A Spanish farthingale from 1550-1630
- A very broad but short hoop, 1740-1750
- Two narrower hoops with some padding
- One without padding
- A wide court hooped petticoat worn by Queen Louisa Ulrika in 1751, and another with no provenance
- Two hinged metal hoops that fold!
- A very small hoop with a single bone, which could become very popular among costumers
- A pair of pocket hoops
- A 1780s bum pad with a supporter to wear underneath

I am already trying to figure out which to use once I finish my current Regency project! I'm thinking of trying a mid-17th century outfit, as Lydia Edwards suggested to me at the CSA symposium that that period is easier to fit than you might think. How about you? Any of them happen to be exactly what you're needing?
17th century 18th century review