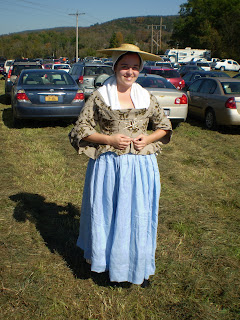 I made the stays out of a kit from Silly Sisters, based on the 1730-40 pattern in Corsets & Crinolines (p. 39).  For fabric, I used a layer of linen canvas, a layer of cotton canvas (the kit did not come with enough canvas for two layers), and a layer of lightweight navy blue linen; all seams and channels were sewn with (I believe) 80/3 linen thread.  The channels on each piece were sewn, then the seam allowances were folded down and the pieces were butted together.  The top edges of all the pieces and the bottom edge of the stomacher were bound with leather; the tabs were bound with twill tape.

While I think the stays were well-constructed, they do not fit as well as they could.  You can see in the above picture that they do produce a good curve in the front - but you can also see how low they are in the armscye.  That means there's nothing pressing in on my bust from the side, so the stomacher just presses it down and I end up really wide.  This is eventually pretty uncomfortable. 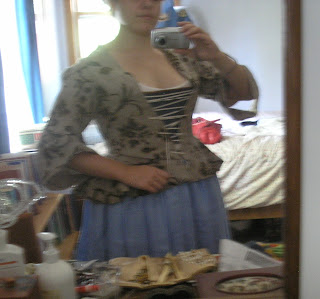 Made out of a heavy linen, probably meant for upholstery, and lined in unbleached muslin; I used both linen and cotton thread.  Originally, I was using the C pattern on p.26 of Patterns of Fashion I (ca. 1760-70):* however, once I put it together I realized that it was far too short for me, and because the pieces are shaped with no waist seam, it would have been difficult to enlarge by piecing.  So I put it away for a while and started over on jacket B (ca. 1735-40), though I kept C's sleeves and cuffs, and I had the pattern draped on myself rather than just scaling up.  I used the method shown in Costume Close-Up, where the outer fabric and one piece of the lining are sewn together, and then the other piece of the lining is lapped over the seam and sewn down.  After this picture was taken, I made the stomacher and added in more eyelets so I could cross-lace the jacket closed, as spiral lacing made it crooked.

There are many, many problems here.  Let me list them all so that any other young and foolish people may avoid them.

- Both the armscye and the sleeve head are the wrong shapes in general, and the wrong shapes for each other in particular.  This makes the shoulders of the jacket want to fall off me.
- When the pattern was draped on me, someone didn't understand that the seams are supposed to be side-back (and I didn't catch it, fair's fair), so they're right on the side.  This wouldn't be so bad on its own, but I then used the bodice pieces to draft the skirts, and since I knew the skirt seam was supposed to match up with the bodice seam, this led to the pleats being right over my hips rather than in the back.  It doesn't look like much of a big deal in the 3/4 view above, but when seen head-on I look like I have hips that jut right out.
- This fabric is way, way too heavy.  When I started in on another pair of stays with fabric I ordered from Wm. Booth, I realized that the heavy linen I was using was the same weight as the linen of this jacket.  You do not want to use stays-weight linen for this type of clothing.
- Something ... happened to the neckline while I was sewing it, and I ended up with it stretched way out, so I had to take tucks by the shoulders and at the edge of the stays.
- The cuffs really should have been interlined, and probably sewn on most of the way around the sleeve.

* Hopefully this is not seen as sacrilege, but: after looking at it again with the knowledge I've gained since, I suspect it actually dates from the end of the 1770s.  Due to the cut of the back, one might call it a polonaise jacket? 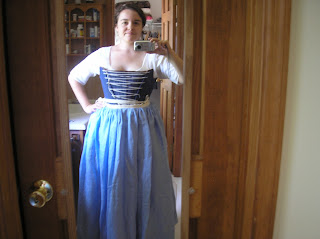 My petticoat is very simple, rectangles pleated to a length of twill tape.  The only way I deviated from the standard method was to make it so both front and back were put on the same piece of tape, which ties over one hip.  Somehow it managed to be too wide, so I'm going to have to take it in at some point.